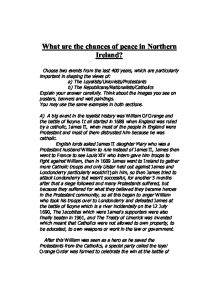 What are the chances of peace in Northern Ireland? Choose two events from the last 400 years, which are particularly important in shaping the views of:

What are the chances of peace in Northern Ireland? Choose two events from the last 400 years, which are particularly important in shaping the views of: a) The Loyalists/Unionists/Protestants b) The Republicans/Nationalists/Catholics Explain your answer carefully. Think about the images you see on posters, banners and wall paintings. You may use the same examples in both sections. A) A big event in the loyalist history was William Of Orange and the battle of Boyne. It all started in 1688 when England was ruled by a catholic, James II, when most of the people in England were Protestant and most of them distrusted him because he was catholic. ...read more.

Limerick was invented which meant that Catholics were not allowed to own property, to be educated, to own weapons or work in the law or government. After this William was seen as a hero as he saved the Protestants from the Catholics, a special party called the loyal Orange Order was formed to celebrate the win at the battle of Boyne, each year there are marches, which some go through a catholic area to remind Catholics that they were defeated, now reinforces view that protestants have every right to be in Ireland. For the Nationalists, this battle loss has meant they have been discriminated for hundreds of years due to the treaty of Limerick which has built up resentment that have carried on ever since. ...read more.

All this shaped Nationalists views Because Sinn Fein got more Support in the electrons and in 1991 set up their own government system the "Dail" in Dublin and ignored British instructions, and to this day there are still peace processes going on. Also today Murals have been painted in Remembrance with 1916 painted on them. Nationalists saw the Easter Rising as the start of independence in Ireland. The Easter Rising was exceptionally importance for the IRA, as they will see it more important then the more peaceful groups. Because the Easter Rising was a violent Nationalist they see it as a piece of their history whereas the more peaceful groups like the SDLP were more in to making peace then fighting for an independent Ireland. ...read more.