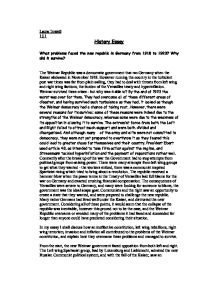 What problems faced the new republic in Germany from 1918 to 1923? Why did it survive?

Laura Towell 13.1 History Essay What problems faced the new republic in Germany from 1918 to 1923? Why did it survive? The Weimar Republic was a democratic government that ran Germany when the Kaiser abdicated in November 1918. However running the country in the turbulent post war times was far from plain sailing, they had to deal with threats from left wing and right wing factions, the burden of the Versailles treaty and hyperinflation. Weimar survived these crises - but why was it able to? By the end of 1923 the worst was over for them. They had overcome all of these different areas of disaster, and having survived such turbulence as they had, it looked as though the Weimar democracy had a chance of taking root. However, there were several reasons for its survival; some of these reasons were indeed due to the strengths of the Weimar democracy, whereas some were due to the weakness of its opposition in allowing it to survive. The extremist force from both the Left and Right failed to attract much support and were both divided and disorganised. And although many of the army and elite were not committed to democracy, they were not yet prepared to overthrow it as they feared this could lead to greater chaos for themselves and their country. ...read more.

This would prove essential in Germany's improving economy. Stresemann was significantly involved in introducing the Rentenmark. This began to stabilise the currency and began to settle inflation. This improved economic situation was reflected in the general economic improvements recorded. Between 1920 and 1925, car sales had increased by over 250%, and production from the staple industries was beginning to return to pre war levels. Investment was pored into Germany, as the allied supervision was attractive to investors. National border anxieties were settled in 1925, when the Locarno treaties were signed in London. A greater feeling of security began to embrace Germany for the first time in over ten years. By 1926, Germany had joined The League of Nations, and Germany had a voice at the international level. Germany could now do more for her people abroad and at home, by 1929 even the withdrawal of the allies from the Rhineland was on the cards. It appears that the German people were more uplifted during the late 1920's, and cultural improvements were occurring throughout the country. There was greater production and use of literature, music, and theatre. Germany was beginning to get back on its feet after a hard war, and relations with the allies and between the government and the people were improving. ...read more.

Hiden states that, "No one factor was responsible for the collapse of the Weimar republic, but the combination of factors and circumstances that lead to it's down fall." In conclusion, I believe this crisis period illustrated the weaknesses of the Republic but it also illustrated the weakness of opposition. The political problems, economic problems, and the burden of Versailles all showed a fragile system that would, even now in hindsight seem easily corruptible, the people were discontent and angry, but yet this wasn't enough to topple the government. It appears that as soon as a radical group such as the Nazi's who were wiling to act on the government came along that could divert them away from the Weimar government they accepted it and used it to overthrow them. In my opinion the Weimar Republic would have served better in later years when it hit yet another crisis as evidence of Weimar's incompetence but considering the time period in question, the conditions were not dire enough for the majority to vote for the extremes and so this is why the government survived. In other words, Weimar Germany did not survive 1918-1923 because it was strong, but rather because the threats to its survival were too weak to overthrow them, they had virtually no opposition! ...read more.