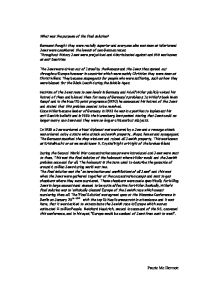 What was the final solution?

What was the purpose of the final solution? Germans thought they were racially superior and everyone else was seen as inferior and Jews were considered the lowest of non-German races. Throughout history Jews were prejudiced and discriminated against and this was known as anti Semitism The Jews were driven out of Israel by the Romans and the Jews then spread out throughout Europe however in countries which were mainly Christian they were seen as Christ killers. They became scapegoats for people who were suffering, such as how they were blamed for the Black Death during the Middle Ages. ...read more.

In 1938 a Jew murdered a Nazi diplomat was murdered by a Jew and a revenge attack was ordered on by a state wide attack on Jewish property, shops, homes and synagogues. The Germans smashed the shop windows and ruined all Jewish property. This was known as KristalNacht or as we would know it, Crystal Night or Night of the broken Glass. During the Second World War concentration camps were introduced and Jews were sent to them. This was the final solution of the holocaust where Hitler would end the Jewish problem once and for all. ...read more.

These chambers were made specifically for killing Jews in large amounts and seemed to be quite effective for Hitler. Basically, Hitler's final solution was to 'ethnically cleanse' Europe of the Jewish race which meant murdering them all. The 'Final Solution' was agreed upon at the Wannsee Conference in Berlin on January 20th 1942 with the top 15 Nazi bureaucrats in attendance and it was here, that it was decided to exterminate the Jewish race in Europe which was an estimated 11 million People. Reinhard Heydrich, second in command of the SS, convened this conference, and in his eyes, "Europe would be combed of Jews from east to west". ?? ?? ?? ?? Pauric Mc Dermott ...read more.