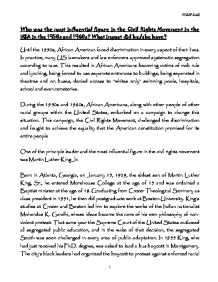 Who was the most influential figure in the Civil Rights Movement in the USA in the 1950s and 1960s? What impact did he/she have?

Who was the most influential figure in the Civil Rights Movement in the USA in the 1950s and 1960s? What impact did he/she have? Until the 1950s, African American faced discrimination in every aspect of their lives. In practice, many US lawmakers and law enforcers approved systematic segregation according to race. This resulted in African Americans becoming victims of mob rule and lynching, being forced to use separate entrances to buildings, being separated in theatres and on buses, denied access to "whites only" swimming pools, hospitals, school and even cemeteries. During the 1950s and 1960s, African Americans, along with other people of other racial groups within the United States, embarked on a campaign to change this situation. This campaign, the Civil Rights Movement, challenged the discrimination and fought to achieve the equality that the American constitution promised for its entire people One of the principle leader and the most influential figure in the civil rights movement was Martin Luther King Jr. Born in Atlanta, Georgia, on January 15, 1929, the eldest son of Martin Luther King, Sr., he entered Morehouse College at the age of 15 and was ordained a Baptist minister at the age of 18. ...read more.

The next year he gave up his pastorate in Montgomery to become co-pastor (with his father) of the Ebenezer Baptist Church in Atlanta, a strategic move that enabled him to participate more effectively in the national leadership of the growing Civil Rights Movement. At that time, black leadership was undergoing a radical transformation. Having once focused on legal action and reconciliation, it was now demanding change "by any means possible." Differences of ideology and influence between the SCLC and other groups were unavoidable, but King's prestige ensured that non-violence, although not universally popular, remained the official mode of resistance. In 1963 he led a massive civil rights campaign in Birmingham, Alabama, and organized drives for black voter registration, desegregation, and better education and housing throughout the South. During these non-violent campaigns he was arrested several times. He led the historic March on Washington, August 28, 1963, where he delivered his famous "I Have a Dream" speech, where he spoke of his dream for a different America. In 1964 King was awarded the Nobel Peace Prize for his efforst in the civil rights movement. ...read more.

He was not discourage, however, for as he put it on April 3, 1968, he had "been to the mountain top and seen the Promised Land". The following day King was shot and killed in Memphis, Tennessee. Some 100,000 people attended his funeral in Atlanta. A white escaped convict, James Earl Ray, was arrested for the murder; he pleaded guilty and in March 1969 was sentenced to 99 years in prison. In 1983 the third Monday in January was designated a national holiday in honour of Martin Luther King, Jr.'s birthday; his Atlanta birthplace and gravesite were made a national historic site. This shows how Martin Luther King Jr. was one of the most prominent and influential figures in the construction of the Civil Rights Movement in the USA. His moral beliefs had led the African Americans to an equal superiority lifestyle today. By the start of the twenty first century, open r****m had become unacceptable and African Americans were playing increasingly significant roles in all aspects of United States life. At the same time, the Civil Rights Movement has yet to succeed in overcoming the prejudices that were built up across many generations. TULIP DAS 1 ...read more.

A solid response to the given question; and provides a clear and definitive answer. However, I feel there is too much 'background info' (wiki-drivel) at the start which isn't great. The main focus should be on what MLK did ...

A solid response to the given question; and provides a clear and definitive answer. However, I feel there is too much 'background info' (wiki-drivel) at the start which isn't great. The main focus should be on what MLK did and evaluating his impact on the movement throughout. For example, discussing the 'March on Washington', his skills as an orator as well as some percieved negatives (Selfish? Womaniser? Hypocrite?).

Fairly good, high level of biographical information as well as detail of certain events during his campaign and their overall impact. I would like to see a few comparisons to other significant leaders, Marcus Garvey, Malcolm X and W.E.B Du Bois explored further. Why did you choose King? However, on the whole, a decent level of analysis here.

Good. Spelling, grammar and punctuation are all sound and the essay itself is well organised. However I would advise a more concise order which allows an examiner to clearly identify your view, reasoning and conclusions.