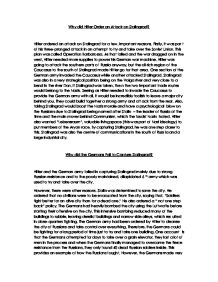 Why did Hitler order an attack on Stalingrad, yet fail to capture it?

Why did Hitler Order an Attack on Stalingrad? Hitler ordered an attack on Stalingrad for a few, important reasons. Firstly, it was part of his three-pronged attack in an attempt to try and take over the Soviet Union. This plan was called Operation Barbarossa. As that failed and the war dragged on in the west, Hitler needed more supplies to power his German war machine. Hitler was going to attack the southern parts of Russia anyway, but the oil rich region of the Caucasus to the south of Stalingrad made Hitler go for that area. One section of the German army invaded the Caucasus while another attacked Stalingrad. Stalingrad was also in a very strategical position being on the Volga river and very close to a bend in the river Don. ...read more.

Hitler and the German army failed in capturing Stalingrad mainly due to strong Russian resistance and to the poorly maintained, dilapidated 6th army which was used to try and take over the city. However, there were other reasons. Stalin was determined to save the city. He ordered that no civilians were to be evacuated from the city, saying that, "Soldiers fight better for an alive city than for a dead one." He also ordered a "not one step back" policy. The Germans had heavily bombed the city using the Luftwaffe before starting their offensive on the city. This intensive bombing reduced many of the buildings to rubble, leaving derelict buildings and narrow side alleys, which resulted in close-quarters fighting. The German army had been ordered by Hitler to cleanse the city of Russians and take control over everything. ...read more.

Paulus, the commander of that part of the German army, could have evaded the counter attack but Hitler forbade him from doing it. Hitler said, "Surrender is forbidden. 6 Army will hold their positions to the last man." Without the Germans being able to withdraw from the situation, they had to endure the harsh Russian winter with a considerable lack of supplies. This more or less brought about the defeat of the German army and Paulus had no choice but to eventually surrender to the Russians on January 31st 1943 In conclusion, the Germans failed to capture Stalingrad mainly due to the Russians fighting hard for every building in the city and the fact that the Germans didn't send an army at full strength to Stalingrad (some of the army had been directed to capture Rostov and march on to the Caucasus). However, the fact that Hitler interfered with his Generals and wouldn't let Paulus retreat brought about the failure quicker. ?? ?? ?? ?? ...read more.