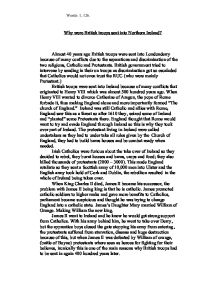 why were british troops sent into Ireland?

Why were British troops sent into Northern Ireland? Almost 40 years ago British troops were sent into Londonderry because of many conflicts due to the separations and discrimination of the two religions, Catholic and Protestants. British government tried to intervene by sending in their on troops as discrimination got so escaladed that Catholics would not even trust the RUC (who were mainly Protestant.) British troops were sent into Ireland because of many conflicts that originated to Henry VIII which was almost 500 hundred years ago. When Henry VIII wanted to divorce Catherine of Aragon, the pope of Rome forbade it, thus making England alone and more importantly formed "The church of England." Ireland was still Catholic and allies with Rome, England saw this as a threat so after 1610 they, seized some of Ireland and "planted" some Protestants there. England thought that Rome would want to try and evade England through Ireland so this is why they took over part of Ireland. The protestant living in Ireland were called undertakers as they had to under take all rules given by the Church of England, they had to build barns houses and be combat ready when needed. ...read more.

protestants where seen as heroes for fighting for their believes, ironically this is one of the main reasons why British troops had to be sent in again 400 hundred years later. This in many ways led to the rising of Sinn Fein who were a political group fighting for Ireland's freedom, in the sense they were also corrupt and had the support of the IRA (Irish republican army.) The Sinn Fein, one of the leaders Michael Collins, who raised a lot of armies, actually signed the partition. Britain thought the only way to resolve Irelands conflicts would be to try and buy both Ulster and Ireland off, reluctantly accepted by both sides Ireland was once and for all separated (1920),). Possible short term effects of the British troops sent in would be the discrimination against Catholics, due to the bad blood because of plantation and the reformation and the battle of Derry. The first of many short term causes was the blatant vote rigging or Gerrymandering, which caused many Catholics to have bad or even no house at all even if there were 12 in a family, but the Protestants would get them due to the discrimination. ...read more.

The protestants thought the civil rights were all IRA, and thought they would take matters into their own hand and brutal rioting broke out. The b specialist actually helped the rioters and the RUC did little to nothing to help the matter. Soon after the events that occurred at Burntollet bridge and the appalling display by the RUC led to the Battle of Bogside. This battle was on the day of the apprentice boys march, (mentioned above) the protestants would march and "celebrate" the honorable apprentice boys. They would sing offensive songs such as "Drive the Billy-boys back" and throw missiles at the Catholics such as rocks and coins. On august 1969 the march began, even thought many people thought it would inevitable end up in a full scale riot. The Catholics tried to barricade themselves in but the Protestants ran at the barrier full force to get at them, the RUC were actually trying to get the barrier down (supposedly trying to break up the riot but couldn't get to them). This appalling riot caused the sending of the troops in, Catholics thought it was a godsend as they heated the RUC so much. ...read more.