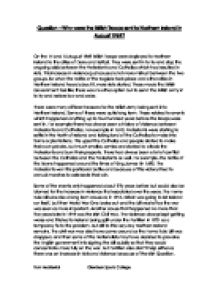 Why were the British Troops sent to Northern Ireland in August 1969?

Question - Why were the British Troops sent to Northern Ireland in August 1969? On the 14 and 15 August 1969 British Troops were deployed to Northern Ireland to the cities of Derry and Belfast. They were sent in to try and stop the ongoing crisis between the Protestants and Catholics which had resulted in riots. This increase in violence just caused a lot more mistrust between the two groups. So when the Battle of the Bogside took place and other cities in Northern Ireland heard about it, more riots started. These made the British Government feel like there was no other option but to send the British army in to try and restore law and order. There were many different reasons for the British Army being sent into Northern Ireland. Some of these were quite long term. These related to events which happened anything up to four hundred years before the troops were sent in. For example there has always been a history of violence between Protestants and Catholics. For example in 1610, Protestants were starting to settle in the North of Ireland and taking land of the Catholics to make into farms or plantations. ...read more.

Another complaint that they believed was getting worse was the way that the RUC (Royal Ulster Constabulary) couldn't do their jobs as some off duty B-Specials were attacking Catholics on marches. For example, when Catholics went on the march going across Burntollet Bridge they were caught on television cameras attacking the marchers, which was creating a lot of bad publicity for the British Government. There were a few short term causes for the British troops being sent in as well, one of which was Austin Currie's (Catholic MP) sit in. He and a lot of other Catholics went and sat in a woman's house and refused to move. They decided to do this sit in as they were protesting against the unfair allocation of housing in County Tyrone. They refused to move until eventually the RUC came and moved them from the woman's house. Another short term cause was the incident at Craigavon Bridge. This is where Catholics went on a march through Londonderry and were blocked by police barricades. They, like the Austin Currie sit in, were marching because they believed they were not getting their human rights, due to the unfair allocation of housing because Catholics were being forced to stay with other families in one house, sometimes only sharing two bedrooms with eleven or twelve people. ...read more.

I also believe they did it so that they could help the RUC gain control once again and make sure they were being fair to all parties. When the troops were sent to Northern Ireland the Catholics saw them as neutral because even though at the time Britain was a Protestant country, because they hadn't lived in Northern Ireland, they would be fair to both sides. So you would quite often see house wifes, children etc, bringing out cups of tea, sandwiches for the soldiers. But when they found out all they were there for was to stop violence and were not on anybody's side they quickly lost the support of the Catholics and more violence was occurring all over Northern Ireland. So when they shot thirteen Catholics on a march they had to find an excuse for killing them, even though they didn't have any weapons on them. I believe the biggest reason for the British troops being sent in was because the fighting had increased so much that they were getting bad publicity because they couldn't control a country in their own kingdom. ?? ?? ?? ?? Tom Hedderick Glenburn Sports College ...read more.