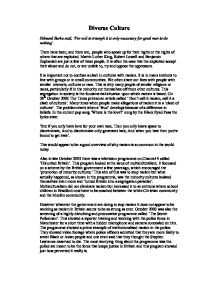 Diverse Culture Edmund Burke said, 'For evil to triumph it is only necessary for good men to do nothing'. There have been, and there are, people who speak up for their rights or the rights of others that are exploited. Martin Luther King, Robert Lowell and Benjamin Zephaniah are just a few of these people. It is often the case that the exploited accept their abuse and do not, or are unable to, try and oppose the oppressors. It is important not to confuse a clash in cultures with racism. It is in mans instincts to live with groups or in small communities. We often share our lives with people with similar interests, cultures or race. This is why many people of similar religions or races, particularly if in the minority cut themselves off from other cultures. This segregation in society is the fundamental situation upon which racism is based. On 26th October 2003 The Times printed an article called ' Don't call it racism, call it a clash of cultures'. Many times when people make allegations of racism it is a 'clash of cultures'. The problem starts when a 'feud' develops because of a difference in beliefs. In the current pop song 'Where is the love?' sung by the Black Eyed Peas the lyrics state: 'But if you only have love for your own race, Then you only leave space to discriminate, And to discriminate only generates hate, And when you hate then you're bound to get irate'. This would appear to be a good overview of why racism is so common in the world today. Also in late October 2003 there was a television programme on Channel 4 called 'Disunited Britain'. This program looked at the issue of multiculturalism; it focussed on a scheme by the British government a few years ago, which encouraged the 'promotion of minority cultures.' This aim of this was to stop racism but what actually happened, as shown in the programme, was the minority cultures isolated themselves even more and 'turned Britain into a segregation paradise'. ...read more.

He wanted him to be buried with his men, the men he had fought with whose bodies were thrown into a ditch, a mass grave. The next stanza starts with the line 'The ditch is nearer'. This simple, powerful statement brings the reader back to the fact that death is always near. There is a reference to an advertisement using a photograph of the atomic bomb exploding at Hiroshiama and claiming that a Mosler safe survived the blast. Lowell is outraged at the use of an event which killed so many people has been cheapened to be used in a commercial. Again we see how he finds America is obsessed with commercialism and money. The penultimate stanza consists of one line 'Colonel Shaw is riding on his bubble, he waits for the blessed break.' This metapjor describes Shaw and Lowell are waiting for freedom to come, 'the blessed break'. However in the 'bubble' of life they travel away from freedom as they wait for it to come. The last stanza starts with the simple phrase 'the aquarium is gone'. This is a short and powerful statement showing that the traditional values of Lowell's childhood have been lost on the commercialism of modern America. Cars have replaced the fish ' giant fined cars nose forward like fish'. The phrase 'a savage serility slides by on grease' implying we are now are all servanyts to money and aiming to slide through life without effort. This phrase uses sibilants to link it and make it more powerful. America is slidingalong and cannot be stopped as it searches for power and more wealth. 'For the Union Dead' talks about America and life in different periods of time. This poem was written one hundred years after the American Civil War and refers to this. The civil war was fought primarily to abolish slavery and for the equality of Negroes. ...read more.

The penultimate line of the poem is a single word; 'Because' this is alone on the line and allows the poem to build up to the final statement. It ends as it began, 'we know who the killers are'. He is confirming we know the identity of the killers even if he does not. Benjamin Zephaniah uses colloquial language throughout most of this poem to show that he is one of the people and emphasises his feelings of brotherhood. This is important as it supports his themes of justice and equality. Zephaniah uses 'we', 'our' and 'us' to show unity and equality. Zephaniah uses 'we' fifteen times in this poem, whenever he expresses his opinion he uses 'we' rather than 'I'. In this way he imposes his opinion and emphasises his beliefs. There is no rhyming scheme or rhythm in this poem so the power and impact comes from the strong emotion personally felt and the Lexis. These two poems open in different ways. 'What Stephen Lawrence has taught us' starts of by going straight to the point and is very explicit. He clearly shows what he is trying to say and uses strong adjectives like 'strut' and uses similes to add effect. In contrast Robert Lowell starts 'For the Union Dead' by referring to his memory as a child and gently leads the reader to his opinion, he implies meaning and ideas for the reader to interpret in their own way. Both are effective but both use completely different techniques. In both poems we are aware of the real motivation of the poems. Again Benjamin Zephaniah uses very powerful explicit writing and Robert Lowell using hidden meanings. Neither poems are telling a sequence of chronological events but linking thoughts together in ways to provoke reactions from the audience. Zephaniah writes very directly most of the time where he says exactly what he means whereas Lowell writes on many levels leaving the individual to think and interpret. Both ways are very effective. ...read more.