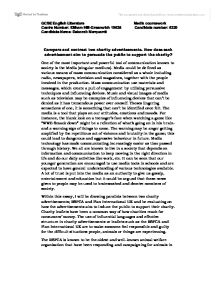 Compare and contrast two charity advertisements. How does each advertisement aim to persuade the public to support the charity?

Compare and contrast two charity advertisements. How does each advertisement aim to persuade the public to support the charity? One of the most important and powerful tool of communication known to society is the Media (singular medium). Media could be defined as various means of mass communication considered as a whole including radio, newspapers, television and magazines, together with the people involved in the production. Mass communication use materials and messages, which create a pull of engagement by utilizing persuasive techniques and influencing devices. Music and visual images of media such as television may be examples of influencing devices that can't be denied as it has tremendous power over oneself. Theses lingering sensations of one, it is something that can't be identified once felt. The media is a tool that plays on our attitudes, emotions and moods. For instance, the blank look on a teenager's face when watching a game like "WWE Smack down" might be a reflection of what's going on in his brain-and a warning sign of things to come. The warning may be anger getting amplified by the repetitious act of violence and brutality in the game; this could lead to dangerous and aggressive behaviour in future. Media technology has made communicating increasingly easier as time passed through history. We all are known to live in a society that depends on information and communication to keep moving in the right direction in life and do our daily activities like work, etc. It can be seen that our younger generation are encouraged to use media tools in schools and are expected to have general understanding of various technologies available. A lot of trust is put into the media as an authority to give us gossip, entertainment and education but it could be argued that these news given to people may be used to brainwashed and deceive members of society. Within this essay, I will be drawing parallels between two charity advertisements; RSPCA and Plan International UK and be evaluating on how the advertisements aim to induce the public to support their charity. ...read more.

This guilt makes us want to donate our money to prevent this from happening to any cute puppy like poppy. Tara is viewed as a dog with a hefty head for its emaciated body. The picture represents shocking malnourishment Tara is experiencing. We tend to reason malnourishment occurs within humans, but this picture shows otherwise. It shows malnourishment can occur with lovely animals. Her eyes are touched down to the ground increases the sad emotions we feel as it seems Tara is searching for every bit of food she can lay her mouth on. Tara's image is very disgusting and shocking, and the fact it is left as the last image makes it the picture left in our heads. The pictures used in the advert are very appropriate as it made as empathise with the level of abuse the animals got from unwilling owners. The pictures promote the message or story written making it much realistic and believable. Contents of this advert are arranged in well space columns, making it effortless to understand. Each section in the advert is arranged neatly and pictures fixed at the right places. Having a border round the personal letter written by Collins Strong makes it appear special and individual to us though it has been written to everyone. Each element in the advert, pictures, structure border etc binds together to make this advert really persuasive. The Subtitles like 'Trio's Story' is written in bold letters making it much attractive and appealing to one eyes. This would enable us to read the story and know much more about Trio. However for the caption, there is an idle presentation. There letter presentational skills are quite low as bold, italics etc is not in use, the font style is quite ordinary, not having a large impact on us. There could have been a change of font style, something like font style 'Aharoni' which is very bold and large or 'Impact' which is heavy letters close joined together would be much suitable in attracting the reader once advert is published in newsletter. ...read more.

The precision of this amount shows that every penny to be given to the charity counts in making a difference in people's lives. The advert decides to put this image and fact file at the end as it is much more shocking as the childe is very young, just 5, also less fortunate as Suhartono's family earns much smaller amount of income compared to Suresh's. This effect of the last image as the saddest makes you feel very blameworthy and responsible, also we feel much open-hearted and are more likely to donate to Plan International UK. The RSPCA and Plan International UK included large numbers of diverse techniques and methods to intrigue the reader or an audience in donating to their charity. The use of having a letter personalised in the advert, RSPCA, is a very friendly approach and draws the reader to the charity. Also the use of having bold block letters for the heading in the Plan International UK was very captive and has a big brunt on the reader, giving them the appeal to read the advert. I personally think the RSPCA advert had a little more approach to the audience than Plan International because the advert had a much forthcoming and piercing loom to the reader. The language The RSPCA exploit is much more sociable; it uses smooth and soft tongue to influence the reader in donating their money and also each section of the advert were contrasting. For instance; first section of the RSPCA talks about the brutal abuse of Trio, second section talks about the confident, inspiring Collins Strong, the inspector and the third is about the gloomy accounts of Tara and Poppy. The sudden adjustment of moods and atmosphere of language use very inducing and gives the edge of reading on. I think both advertisements have developed different, strong powerful effects to the reader and they both would definitely obtain donators to help their charity. ?? ?? ?? ?? GCSE English Literature Media coursework Centre Number: Eltham Hill-Greenwich 10628 Candidate number: 6220 Candidate Name: Deborah Marquardt ...read more.