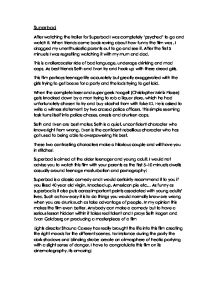 Superbad After watching the trailer for Superbad I was completely 'psyched' to go and watch it. When friends came back raving about how funny the film was , I dragged my unenthusiastic parents out to go and see it. After the first 5 minuets I was regretting watching it with my mum and dad. This is a rollercoaster ride of bad language, underage drinking and mad cops. As best friends Seth and Evan try and hook up with there dread girls. This film portrays teenage life accurately but greatly exaggerated with the girls trying to get booze for a party and the lads trying to get laid. When the complete loser and super geek Foogell (Christopher Mintz Plasse) gets knocked down by a man trying to rob a liquor store, which he had unfortunately chosen to try and buy alcohol from with fake ID. ...read more.

Superbad is aimed at the older teenager and young adult. I would not advise you to watch this film with your parents as the first 5-10 minuets dwells casually around teenage masturbation and pornography! Superbad is a classic comedy and I would certainly recommend it to you if you liked 40 year old virgin, Knocked up, American pie etc... As funny as superbad is it also puts across important points associated with young adults' lives. Such as how easy it is to do things you would normally know are wrong when you are drunk such as take advantage of people. In my opinion this makes the film even better. Anybody can make a comedy but to have a serious lesson hidden within it takes real talent and I prays Seth Rogen and Evan Goldberg on producing a masterpiece of a ...read more.

Not only has Super bad got amazing cinematography, the music accompanying this film is superbly chosen and really enhances the great moods and themes of the film. Songs like 'Do Me' fit in perfectly with the sexy scenes. Although this film rates right near the top of my favourite films everything has its faults. I feel the crazed cops ruin the, otherwise believable story line and although they add some great slapstick comedy to the film they don't really fit in with the rest of the story. However talking to friends they thought that the cops were the best characters so I guess you will have to go and watch it and decide for yourself. Seth Rogen and Evan Goldberg have produced in my opinion one of the funniest movies I have seen! Jonah Hill (Seth) and Michael Cera (Evan) go together like Laurel and Hardy. Producing a classic comedy movie! ...read more.