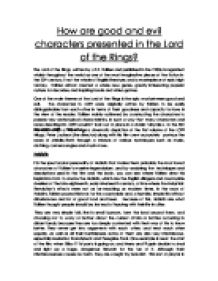 How are good and evil characters presented in The Fellowship of the Ring?

How are good and evil characters presented in the Lord of the Rings? The Lord of the Rings, written by J.R.R. Tolkien and published in the 1950s, is regarded widely throughout the world as one of the most imaginative pieces of the fiction in the 20th century, if not the whole of English literature, and a masterpiece of epic high fantasy. Tolkien almost created a whole new genre, greatly influencing popular culture for decades, and inspiring books and video games. One of the main themes of the Lord of the Rings is the epic war between good and evil, the characters in LOTR were originally written by Tolkien to be easily distinguishable from each other in terms of their goodness and capacity for love in the view of the reader. Tolkien mainly achieved by constructing the characters to possess very archetypical characteristics, in such a way that many characters and races described in LOTR wouldn't look out of place in a classic fairytales. In the film The Fellowship of the Ring, a cinematic depiction of the first volume of the LOTR trilogy, Peter Jackson (the director) along with his film crew accurately portrays the races of Middle-Earth through a mixture of various techniques such as music, clothing, camera angles and much more. Hobbits It is the spectacular personality of Hobbits that makes them probably the most loved characters of Tolkien's massive legendarium, and by analysing the techniques and descriptions used in the film and the book, you can see where Tolkien drew his inspiration from to create the Hobbits, which are the English villagers and countryside dwellers of the late eighteenth, early nineteenth century, a time where the Industrial Revolution's effects were not as far-reaching as modern times. In the race of Hobbits, Tolkien poured his love for the countryside and, a humble, simple life without disturbances and lot of good food and beer. ...read more.

Men, who were powerful kings, got given magic rings by Sauron, and how they were blinded by their greed and lust for power and fell in to darkness, eventually to become the Ringwraiths, neither living nor dead. Furthermore, the audience sees that the yearning for power exists within the personalities of Third Age men, like Boromir. Throughout the film, it is clearly noticeable that he wants to obtain the Ring only to use it for his city's needs (or his) when talking at the Council of Elrond, and near the end of the film he tries to steal the Ring from Frodo, getting very angry at the little hobbit because he doesn't want to give it to Gondor. Tolkien, the author, modelled the Men's personality on normal, modern-day humans so it is clear where he got his inspiration for a complex, multi-sided personality from; since humans have the capability to be extremely kind and courageous, but also at the same time have a susceptibility to fall into corruption when given the prospect of power. Additionally, because Men do not appear as much as the other races do in The Fellowship of the Ring, they do not really have an individual music soundtrack, however there are many moments in the film when music is played when either Aragon or Boromir appear on screen. For example, when the camera shows Aragon as a hooded, mysterious figure staring at the Hobbits, mysterious music is played, causing the audience to not know whether the man is good or evil. When Boromoir is on screen, a lot of themes are played, e.g. when he arrives at Rivendell on his horse, epic music is played, reflecting his noble and heroic nature. Also, whenever Boromir has the Ring, such as when he held it in his hand when the Fellowship are trekking across the snow, eerie, creepy music is played to symbolize Boromir's temptation towards the Ring. ...read more.

Firstly, when the Fellowship is first aware of the Balrog, and when all the Goblins run away from the loud rumbling and faint orange light, there is in fact no music, but complete silence. As the Fellowship is left standing in the huge hallway, all the audience can hear is the big footsteps and growling of the Balrog and the quiet breathing of the good characters. As the silence drags on and the rumbling becomes louder, it adds suspense and tension, and also makes the audience think that the thing that is coming towards them is in anyway good or nice. However, when Gandalf shouts "Run!" and turns around and runs, the Fellowship running with him, the music suddenly blares up , signifying the urgency of the their escape. Later, when the Fellowship are escaping and passing over bridges while being chased by the Balrog, you can hear ominous chanting and loud drums. This not only builds up tension as the audience don't know whether the Balrog catches up with them, but causes the audience to think of the Balrog as not a simple minion of the Dark Lord, but an extremely ancient evil. To conclude, I think that perhaps that throughout the whole of his epic fantasy, Tolkien, and later Jackson has presented the races and characters of Middle Earth in a fairytale kind of way. As most people know, typical fairytales written in olden times almost always contain the same archetype or stock character, someone who seems to have the same characteristics in every tale; the evil sorceress and her brutal minions and the beautiful prince and princess. Because of this, many people have noted that the personality and behaviour of certain characters and races in the film are entirely uncomplicated, and sometimes easily predictable (with exception to perhaps Hobbits, who are a brilliant, original invention) Despite this clich�d sort of storytelling, LOTR has become the most famous fantasy piece of literature of the 20th century, if not of all time. ...read more.