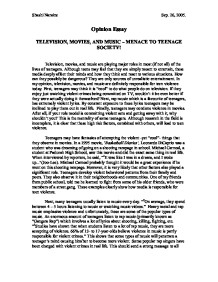 Violence in movies, television, and music is deeply affecting the minds of teenagers. There is strong evidence to support the fact that exposure to violence in the media results in increased incidence of teen violence

Opinion Essay TELEVISION, MOVIES, AND MUSIC - MENACE TO TEENAGE SOCIETY! Television, movies, and music are playing major roles in most (if not all) of the lives of teenagers. Although teens may feel that they are simply meant to entertain, these media deeply affect their minds and how they think and react to various situations. How can they possibly be dangerous? They are only sources of unrealistic entertainment. In my opinion, television, movies, and music are definitely responsible for teen violence today. First, teenagers may think it is "cool" to do what people do on television. If they enjoy just watching violent crimes being committed on TV, wouldn't it be even better if they were actually doing it themselves? Next, rap music which is a favourite of teenagers, has extremely violent lyrics. By constant exposure to these lyrics teenagers may be inclined to play them out in real life. ...read more.

They also observe it in their neighborhoods and communities. One of my friends from public school, told me he learned to fight from some of his older friends, who were members of a street gang. These examples clearly show how media is responsible for teen violence. Next, many teenagers usually listen to music every day. "2On average, they spend between 4 - 5 hours listening to music or watching music videos." Heavy metal and rap music emphasize violence and unfortunately, these are some of the popular types of music. An enormous amount of teenagers listen to rap music (primarily known as "Gangsta Rap") which involves a lot of lyrics about shooting, killing, fighting, etc. "3Studies have shown that when students listen to a lot of rap music, they are more accepting of violence. 66% of 13- to 17-year-olds believe violence in music is partly responsible for violent crimes." This shows that some types of music will penetrate a teenager's mind causing him/her to become more violent. ...read more.

If some of them have seen a drug dealer making thousands of dollars on television and getting away with it, the idea of becoming a drug dealer would instantly appear in their minds. This is yet another example of how media has a huge impact on teen violence. Violence in movies, television, and music is deeply affecting the minds of teenagers. There is strong evidence to support the fact that exposure to violence in the media results in increased incidence of teen violence. Personal experiences from various teenagers who have committed crimes tend to confirm that these factors did play a major part. Organizations which are dealing with these issues have accepted the fact that violence in movies, television, and music is ultimately responsible for teen violence and are now working with the media to control this. 1"Teen violence" WENDY HUFFMAN 1989-2000 <http://homepages.ius.edu/WHUFFMAN/teenviolence.htm> 2 "Youth and Violent Music" Media Scope 2000 <http://www.mediascope.org/pubs/ibriefs/yvm.htm> 3 "Youth and Violent Music" Media Scope 2000 <http://www.mediascope.org/pubs/ibriefs/yvm.htm> 4 "Youth Violence prevention" Media Violence Facts and Statistics <http://www.safeyouth.org/scripts/faq/mediaviolstats.asp> ?? ?? ?? ?? Shashi Naraine Sep. 26, 2005. ...read more.