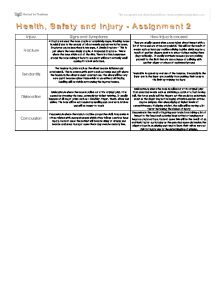 Injury Signs and Symptoms How injury is caused Fracture A fracture is wear the bone cracks or completely snaps. Breaking bones is painful due to the amount of blood vessels and nerves in the bones. Fractures can be described in two ways. A Simple Fracture - This is just where the bone simply cracks. A Compound Fracture - This is where the bone sticks out of the skin. There is often tenderness around the bone making it hard to use and it will most certainly swell causing it to look deformed. They are usually caused when a bone takes direct impact with a lot of force and are often very painful. This will be the result of events such as hard and reckless sliding tackles which may be a result of another players desire to win or fatigue making them play recklessly. It usually extrinsic because you are pushing yourself to the limit there is more chance of colliding with another player or pieces of equipment/ground Tendonitis The tendons in joints such as the elbow become inflamed and sore/painful. ...read more.

In most cases this will be the result of an extrinsic factor e.g in rugby as the game increases ain tension the players focus in on winning and tend to leave their selves more at risk for injury due to the determination of winning. Illness Signs and Symptoms Asthma This makes a persons airways constrict making breathing difficult. Constriction is normally triggered by certain events such as allergies and temperature change however they may also be exercise induced, meaning that they are triggered by exercise and a lot of the time 'asthma attacks' will be caused by these extrinsic factors. When participating in competitive games asthmatic people may be required to push their selves' harder but will not be receiving as much oxygen as required due ti there airways constricting. This ends up almost like a vicious circle as they work harder to get more oxygen but as they work harder their airways constrict more. People having and 'asthma attack' will suffer with symptoms such as a tight chest; also they may start wheezing and be short of breath. ...read more.

The results of hyperthermia are that the person will be left exhausted. Headaches, tiredness and thirst are also common when suffering from Hyperthermia. To relive these symptoms the person should drink lots of fluids, while exercising and when recovering. If the person becomes to hot they may become unconscious then they would require the need of being put on a drip to supplement their lack of fluid. Hypoglycaemia Hypoglycaemia is caused by having low levels of glucose in the blood so enough isn't reaching the vital places e.g. the brain. It is commonly associated with people who have Type One Diabetes. Not enough food, too much exercise, consuming too much alcohol and having too much insulin in the blood all contribute to causing hypoglycaemia and is mainly caused intrinsically by the person suffering as it their fault for not taking the precautions required before taking part in sport. The symptoms of hypoglycaemia are confusion, shaking, paleness, hunger and in some extreme cases, unconsciousness. Eating food rich in carbohydrates can reverse these effects quite quickly ...read more.