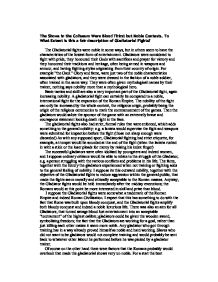 The Shows in the Coliseum Were Blood Thirst but Noble Contests. To What Extent is this a fair description of Gladiatorial Fights?

The Shows in the Coliseum Were Blood Thirst but Noble Contests. To What Extent is this a fair description of Gladiatorial Fights? The Gladiatorial fights were noble in some ways, but in others seem to have the characteristics of the lowest form of entertainment. Gladiators were considered to fight with pride, they honoured their Gods with sacrifices and prayer for victory and they honoured their traditions and heritage, often being armed in weapons and armour, and having fighting styles originating from their country of origin. For example "the Gaul." Glory and fame, were just two of the noble characteristics associated with gladiators, and they were dressed in the fashion of a noble soldier, often trained in the same way. They were often given mythological names by their trainer, nothing says nobility more than a mythological hero. Basic tactics and skill are also a very important part of the Gladiatorial fight, again increasing nobility. A gladiatorial fight can certainly be compared to a noble, international fight for the expansion of the Roman Empire. The nobility of the fight can only be increased by the whole context, the religious origin, probably being the origin of the religious ceremonies to mark the commencement of the games. ...read more.

There was also an aim for all Gladiators, that turned savage blood lust entertainment into an acceptable "tournament" of the highest calibre; gladiators could be given the wooden sword, symbolising freedom; the fact that the Gladiators are working for a goal, rather than just killing each other makes it seem more noble. Any gladiator who got through training has in a way already proved himself as noble and hard working. Slaves who did not want to be gladiators would not complete training and would probably be sent back to whatever other labour he performed before he was picked by a gladiator trainer. Of course on the other hand there were factors that the Romans probably would overlook that made the gladiatorial shows very un-noble. For a start the best gladiators were more than often criminals, and slaves, the very dregs of society. They had a hard life, with a lot of extremely strenuous training that I suppose can add to the nobility of the fight by making it seem more like a professional sport (I mean to the Romans it was a professional Sport.) ...read more.

Gladiatorial shows, were often accompanied by souvenirs and the like, which in my opinion degrades Gladiators from noble sportsmen, to lifeless entertainers. This paired with the fact that they were often hired as entertainment at a dinner party, takes away the nobility. Also taking away from the nobleness is that there were non-related, less noble activities associated with, and inspired by Gladiatorial fights, gambling and prostitution to name but two. Gladiatorial shows were often considered by the emperor as a political weapon to manipulate the people, which is a shame. To conclude by today's standards the shows do seem extremely blood thirsty and due to this not noble. However in Rome, Blood and nobility were not necessarily contradictions, the Gladiatorial shows were certainly not as bloodthirsty as certain other forms of Roman entertainment, e.g. the midday executions. The fights themselves as a formal sport seem quite noble, but when looked at from the perspective of cult entertainment the nobility is lessened. In the gladiator fights the main focus was on skill and not blood. Although death was of course a possibility, the likelihood is that the majority of the time a good gladiator would live to die another day. ...read more.