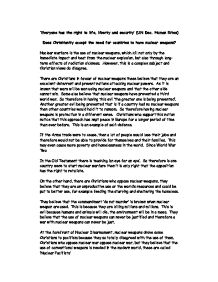 &amp;#145;Everyone has the right to life, liberty and security&amp;#146; (UN Dec. Human Rites) - Does Christianity accept the need for countries to have nuclear weapons?

'Everyone has the right to life, liberty and security' (UN Dec. Human Rites) Does Christianity accept the need for countries to have nuclear weapons? Nuclear warfare is the use of nuclear weapons, which kill not only by the immediate impact and heat from the nuclear explosion, but also through long-term effects of radiation sickness. However, this is a complex subject and Christian views do disagree. There are Christians in favour of nuclear weapons these believe that they are an excellent deterrent and prevent nations attacking nuclear powers. As it is known that wars will be won using nuclear weapons and that the other side cannot win. Some also believe that nuclear weapons have prevented a third world war. So therefore in having this evil 'the greater one is being prevented'. Another greater evil being prevented that is if a country had no nuclear weapons then other countries would hold it to ransom. So therefore having nuclear weapons is protection in a different sense. Christians who support this notion notice that this approach has kept peace in Europe for a longer period of time than ever before. This is an example of self-defence. If the Arms trade were to cease, then a lot of people would lose their jobs and therefore would not be able to provide for themselves and their families. This may even cause more poverty and homelessness in the world. Since World War Two In the Old Testament there is teaching 'an eye for an eye'. So therefore is one country were to start nuclear warfare then it is only right that the opposition has the right to retaliate. On the other hand, there are Christians who oppose nuclear weapons, they believe that they are an unproductive use or the world's resources and could be put to better use, for example feeding the starving and sheltering the homeless. They believe that the commandment 'do not murder' is broken when nuclear weapon are used. ...read more.

Pacifists believe that Jesus taught that violence was wrong and therefore they abide by his teaching. There have been pacifists in the past who have achieved what they set out to do, with out bloodshed, such as Martin Luther King and Gandhi. Wars never settle disputes. It is only when people have had enough of war and sit down and talk that matters are resolved, so therefore is not it just better to talk in the first place and then one need not risk any loss of life. War demoralises people. During a war cruelty and brutality often come out, pacifism would avoid this. During wars there are innocent civilians killed or suffer. And the proportions of people during wars have done nothing wrong. Since the invention of nuclear weapons, there is now the potential to wipe out the entire human race. Pacifism would ensure the continuation of the race. There are non-violent ways in which disagreements can be won or sorted out. Many Christians find themselves in dispute with their nation against justice. Some think that the only was to improve a bad situation is through non-violence eg protest, marches, petitions, boycotts, sit-ins, and letters. These Christians believe tat non-violence actions is morally superior because it is voluntary, creative, dignifying and rewarding. As Gandhi said 'In non -violence the masses have a weapon which enables a child, woman or even decrepit old man to resist the mightiest governments successfully'. Through non-violence everyone who wants a chance is given one. It is a very humane way to fight disagreements, it avoids killing. People's awareness is raised through non-violence and persistence through pressure onto the authority does achieve change in the situation without the pain. In the Sermon on the Mount Jesus said 'Love you enemies and pray for those who persecute you' Do not fight because you do not like someone, love them. He tried to demonstrate how to do more that the minimum to keep peace and avoid conflict. ...read more.

However other Christians believe that violence was needed and used by Jesus when he set an example of throwing the traders out of the temple. He did not want them to continue to use it 'as a den of robbers' The poor people who came into the church to worship were being cheated. Some Christians therefore believe that Jesus was not a pacifist. An evil or corrupt ruler would ignore non-violent protests. War maybe the only way to remove an evil dictatorship and liberate people. Wars have brought out the best in people; bravery, brotherly love and willingness to co-operate with others. A pacifist nation would be vulnerable to harm from those nations who refuse to give up their weapons and therefore that would cause greater problems. The commandment 'Do not kill' refers to murder, not killing in a war. An Overall Christian perspective of war Jesus said, 'Peace I leave with you, my peace I give to you, not as the world gives, I give to you'. (John 14:27). Jesus also said: 'You have heard that it was said 'an eye for an eye, tooth for tooth' But I say to you do not repay evil with evil... love your enemies and pray for those who persecute you'. This is saying how one should love everyone and try to keep peace and two wrongs do not make a right. 'Blessed are the peacemakers for they shall be called Sons of God'. God is very special to Christians, so to be called his son is very special, so this shows that God would like peace kept. Pacifism is very much at the heart if the teaching of Jesus, yet Christians have long been divided about whether it is ever right to go to war or use violence. They all believe that war is wrong, but some believe that there are times when a Christian just has to go to war. This is because the result of not going to war will be worse. However as this is a very complex topic, sometimes wars can be justified, however other Christians will disagree with that. ...read more.