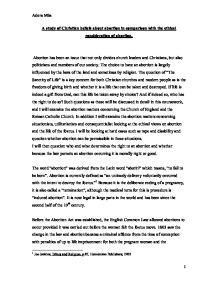 A study of Christian beliefs about abortion in comparison with the ethical consideration of abortion.

A study of Christian beliefs about abortion in comparison with the ethical consideration of abortion. Abortion has been an issue that not only divides church leaders and Christians, but also politicians and members of our society. The choice to have an abortion is largely influenced by the laws of the land and sometimes by religion. The question of "The Sanctity of Life" is a key concern for both Christian churches and modern people as is the freedom of giving birth and whether it is a life that can be taken and destroyed. If life is indeed a gift from God, can this life be taken away by choice? And if indeed so, who has the right to do so? Such questions as these will be discussed in detail in this coursework, and I will examine the abortion matters concerning the Church of England and the Roman Catholic Church. In addition I will examine the abortion matters concerning situationists, utilitarianists and consequentialist looking at the ethical views on abortion and the life of the foetus. I will be looking at hard cases such as rape and disability and question whether abortion can be permissible in these situations. I will then question who and what determines the right to an abortion and whether because the law permits an abortion occurring it is morally right or good. The word "abortion" was derived from the Latin word "aboriri" which means, "to fail to be born". Abortion is currently defined as "an untimely delivery voluntarily occurred with the intent to destroy the foetus."1 Because it is the deliberate ending of a pregnancy, it is also called a "termination", although the medical term for this is procedure is "induced abortion". It is now legal in large parts in the world and has been since the second half of the 19th century. Before the Abortion Act was established, the English Common Law allowed abortions to occur provided it was carried out before the woman felt the foetus move. ...read more.

When dealing with hard cases such as rape and disability, there are several views on whether abortion can be permissible or not. Both the pro-choice and the pro-life groups have as their premise that "every child is a wanted child".15 Both agree that there is nothing worse than bringing a child into the world that is unwanted, unloved or rejected. However, after this initial agreement, the viewpoints are in complete contrast. The vitalist (pro-life) "a priori" (before the experience) argues that all life is wanted so no direct abortion is possible whereas the extreme pro-choice "a priori" leaves all decisions with the woman as the owner of her womb. It was the rape by British soldiers of a young girl in 1938 that justified Dr Aleck Bourne carrying out an illegal abortion in order to safeguard her mental health. The Quality of Life (QOL) which employs a broadly utlilitarian/consequentialist basis has to determine whether an unwanted pregnancy of this kind will not only continue the trauma for the mother but also for her existing family. Furthermore, it might be argued that any child of rape might also suffer the trauma of learning of their violent origins. The C of E sees rape as a justifiable reason for an abortion to occur. Their report Abortion: an Ethical Discussion, (1965)16 speaks of rape needing to be considered strongly as it is not a trivial issue. It also condemns those that insist that the woman must have a child as it falls outside the primary Christian context of love. I agree with this notion. Sometimes, we need to accept "the lesser of the two evils" in order to do the "right" thing and showing compassion for those is even more important in a situation like rape. Bringing a child into the world that was a result of a violent action is not fair on the mother or the child itself. ...read more.