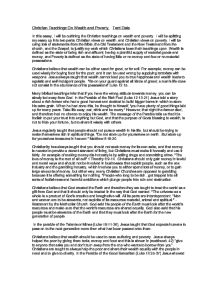 In this essay, I will be outlining the Christian teachings on wealth and poverty.  I will be splitting my essay up into two parts; Christian views on wealth, and Christian views on poverty. I will be using lots of statements from the Bible, the Old Testament and the New Testament from the church, and the Gospel; to justify my work which Christians base their teachings upon. Wealth is defined as the state of being rich and affluent; having a plentiful supply of material goods and money, and Poverty is defined as the state of having little or no money and few or no material possessions.

Christians believe that wealth can be either used for good, or for evil. For example, money can be used wisely for buying food for the poor, and it can be used wrong by supplying terrorists with weapons. Jesus always taught that wealth cannot lead you to true happiness and wealth leads to egoistic and self-indulgent people.  "Be on your guard against all kinds of greed; a man's life does not consist in the abundance of his possessions" Luke 12:15.

Many biblical teachings infer that if you have the wrong attitude towards money, you can be slowly led away from God. In the Parable of the Rich Fool (Luke 12:13-21) Jesus told a story about a rich farmer who had a good harvest and decided to build bigger barns in which to store his extra grain. When he had done this, he thought to himself, 'you have plenty of good things laid up for many years. Take life easy; eat, drink and be merry.' However, that night the farmer died, and therefore had no chance to enjoy his wealth. The message of the Parable tells us that it is foolish to put your trust into anything but God, and that the purpose of Gods blessing to wealth, is not to hide your fortune, but to share it wisely with others.

Christianity has always taught that you should not seek money for its own sake, and that money is needed to provide a decent standard of living, but Christians must make it honestly and use it fairly. An example of making money dis-honestly is by selling drugs and committing crime. "The love of money is the root of all evil" 1 Timothy 6:9-10.  Christians should only gain money in lawful and moral ways and should not be involved in businesses that exploit people, such as the sex industry and the gambling industry, which involves you to either spend lots of money, or to gain large amounts of money, but either way, many Christian Churches are opposed to gambling because it is offering something for nothing. "People who long to be rich...get trapped into all sorts of foolishness and harmful ambitions which plunge people into ruin and destruction.

Christians believe that God created the Earth and therefore they are taught to treat the world as a gift from God and that it should only be treated in the way that God wanted. "The universe as a whole is a product of God's creative and imaginative will. All its parts are interdependent. “Men and women are to be stewards, not exploits of its resources material, animal and spiritual." - Statement by the Methodist Church. God said his people of the Earth must look after the world's resources and make sure that the world's resources are shared equally. God also said that his people must be stewards of the Earth and that they must look after the Earth for the new generation of people.

In the parable of the Talents or Minas (Luke 19:11-26), Jesus taught that God expects humans to pass on to the next generation more than what had been passed onto them.

Christians believe that wealth should be used to ease suffering and poverty.  Jesus always helped the poor by giving them tools, money and food and this is shown in (matthew5: 42) “give to anyone that asks you and don’t turn away from the one who wants to borrow from you”. Christians are taught to always help the poor and share their wealth equally with the people in need and to give to charity. In the Parable of the Good Samaritan (Luke 10:25-37) Jesus showed the commandment to Christians to love God and love their neighbor, which means they must help anyone who is in trouble whether they live next-door or faraway. "If anyone is well off in worldly possessions and sees his brother in need, but closes his heart to him, how can the love of God be remaining in him? Children, your love must be not just words or mere talk, but something active and genuine." 1 John 3:17-18.

To summarize, Christianity teaches that wealth itself is neither bad nor good, but the way it is used can be bad, Christians should not seek money for its own sake. Money is needed to provide a decent standard of living, but Christians must make it honestly and use it fairly. Christianity also teaches that Christians are stewards of the earth and hold their possessions on behalf of God and so should share their wealth with the poor. The teachings of Jesus and the Churches say that they must use their money to help remove poverty and suffering.