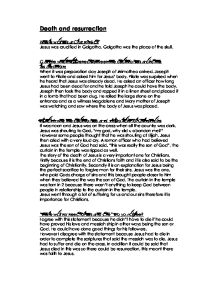 Death and resurrection Where was Jesus Crucified? Jesus was crucified in Golgotha. Golgotha was the place of the skull. Outline what happened between the death of Jesus and the resurrection. When it was preparation day Joseph of Arimathea arrived. Joseph went to Pilate and asked him for Jesus' body. Pilate was surprised when he heard that Jesus was already dead. He asked an officer how long Jesus had been dead for and he told Joseph he could have the body. Joseph then took the body and rapped it in a linen sheet and placed it in a tomb that had been dug. ...read more.

Jesus then cried with a very loud cry. A roman officer who had believed Jesus was the son of God had said, "this was really the son of God". The curtain in the temple was ripped as well. The story of the death of Jesus is a very important one for Christians. Firstly because it is the end of Christians faith and it is also said to be the beginning of Christianity. Secondly it is an explanation for Jesus being the perfect sacrifice to forgive man for their sins. Jesus was the one, who paid Gods charge of sins and this brought people closer to him when they believed the was the son of God. ...read more.

However I disagree with the statement because Jesus had to die in order to complete the scriptures that said the messiah was to die. Jesus had to suffer and die on the cross. In addition it could be said that Jesus died in this was so there could be resurrection, this meant there was faith to Jesus. Overall, I believe Jesus had to die as a way to show he was the Son of Man. Faith is very important and the disciples must show strong faith - "everything is possible for the person who has faith" (MK 10) The importance of a prayer must be understood - "only prayer can drive this kind out, nothing else can" ...read more.