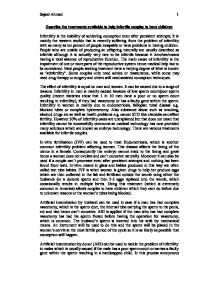 Describe the treatments available to help infertile couples to have children

Describe the treatments available to help infertile couples to have children Infertility is the inability of achieving conception even after persistent attempts. It is mainly the western worlds that is recently suffering from the problem of infertility with as many as ten percent of people incapable or have problems in having children. People who are unable of producing an offspring naturally are usually described as infertile although it is actually very rare to be infertile because it involves/means having a total absence of reproductive function. The main cause of infertility is the impairment of one or more parts of the reproductive system hence medical help has to be considered. Most people seeking treatment have a varying degree of what is known as "subfertility". Some couples only need advice or reassurance, while some may need drug therapy or surgery and others will need assisted conception techniques. The effect of infertility is equal on men and women. It can be caused due to a range of reasons. Infertility in men is mainly caused because of low sperm count/poor sperm quality (recent statistics show that 1 in 10 men have a poor or no sperm count resulting in infertility), if they had vasectomy or has a faulty gene within the sperm. ...read more.

IVF is when woman is given drugs to help her produce eggs which are then collected in the lab and fertilised outside the womb using either the husbands (or a donors) sperm and then 2-3 eggs replaced into the womb, which occasionally results in multiple births. Using this treatment (which is extremely common in America) allows couples to have children which they cant do before due to unknown reasons or the woman's tubes being blocked. Artificial insemination by husband can be used in case if a man has had complete vasectomy, which is the sperm duct, the internal tube carrying the sperm to the penis, cut and tied hence can't conceive. AIH is applied if the man who has had complete vasectomy has had his sperm frozen before having the operation for vasectomy, which is common. The husband's sperm is inserted into his wife by mechanical means. An instrument will be used to do this and the sperm will be placed in the woman's cervix at the most fertile period of the cycle so it is as likely as possible that conception will happen. ...read more.

In this process an egg from another woman is taken which is then fertilised by In Vitro Fertilisation(IVF) using husband's sperm and then placed back into the womb of the wife. Embryo donation can be used in cases in which both male and female in the relationship have problems of fertility. In this procedure both egg and sperm comes from donor which are then fertilised using IVF. If a woman have hysterectomy (or complete hysterectomy), which means that the female has had her reproductive organs removed for various reasons (e.g. Fallopian disease or in an infection), and therefore is unable to have a child or if it is dangerous for her to bear a child (e.g. infection) she may consider surrogacy. Two things can be done in these kinds of situations. The man's sperm can be artificially inseminated into another woman (surrogate mother), who will then have the baby and hand it to the couple at birth. The child will only have the genes from the father in the couple. Secondly, IVF can be carried out. In this method the fertilised embryo is placed into an another woman's womb, this 3rd party (the surrogate mother) will then hand the baby to the original mother and father at birth. Sajeel Ahmed 1 ...read more.