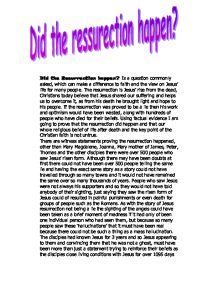 Did the ressurection happen?

Did the Resurrection happen? Is a question commonly asked, which can make a difference to faith and the view on Jesus' life for many people. The resurrection is Jesus' rise from the dead, Christians today believe that Jesus shared our suffering and helps us to overcome it, as from his death he brought light and hope to his people. If the resurrection was proved to be a lie then his work and optimism would have been wasted, along with hundreds of people who have died for their beliefs. Using factual evidence I am going to prove that the resurrection did happen and that our whole religious belief of life after death and the key point of the Christian faith is not untrue. There are witness statements proving the resurrection happened, other than Mary Magdalene, Joanna, Mary mother of James, Peter, Thomas and the other disciples there were over 500 people who saw Jesus' risen form. ...read more.

Firstly the stone being rolled away could have been rolled away could have been looked at in the opinion that guards had rolled away the stone to check the body, but the guards would have had no reason to do this as they were guarding the entrance as their was a rumour about Jesus being risen from the dead and if their was any doubts that Jesus was not dead then there would have had to have been guards in front of the tomb at all times and so although they had proof that Jesus was dead the tomb was still heavily guarded. Secondly Jesus' body was missing from the tomb and the linen being left would be counted as physical evidence. The evidence of these two facts could be that the body could have been taken away by grave robbers or guards, but grave robbers would not have been into the grave because Jesus was poor and so had no possessions. ...read more.

Many people have been persecuted for their Christian beliefs for over 4000 years; people have either been killed by people or have died for their own personal reasons in the belief of life after death. Many people converted to Christianity after the resurrection as they began to believe in the preaching of life after death that Jesus used to speak about. In conclusion using these facts and possible explanations I have proved that the resurrection did happen and so the belief in life after death is true. Also proving that the facts and witness explanations are true as there are no other explanations except the ones written in the true resurrection story and so bias is not used but it is all completely true. The resurrection story is one that has been told for centuries and will still be told for year on year and will remain the base truth of our faith and will be for years to come. ...read more.