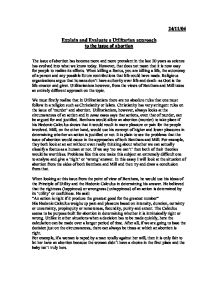 Explain and Evaluate a Utilitarian approach to the issue of abortion

24/11/04 Explain and Evaluate a Utilitarian approach to the issue of abortion The issue of abortion has become more and more prevalent in the last 20 years as science has evolved into what we know today. However, that does not mean that it is now easy for people to realize its effects. When killing a foetus, you are killing a life, the autonomy of a person and any possible future contributions that life could have made. Religious organizations argue that humans don't have authority over life and death- as God is the life-creator and giver. Utilitarianism however, from the views of Bentham and Mill takes an entirely different approach on the topic. We must firstly realize that in Utilitarianism there are no absolute rules that one must follow in a religion such as Christianity or Islam. Christianity has very stringent rules on the issue of 'murder' and abortion. Utilitarianism, however, always looks at the circumstances of an action and in some cases says that actions, even that of murder, can be argued for and justified. Bentham would allow an abortion (murder) to take place if his Hedonic Calculus shows that it would result in more pleasure or pain for the people involved. Mill, on the other hand, would use his concept of higher and lower pleasures in determining whether an action is justified or not. ...read more.

This question in the calculus is not a particularly hard one to answer. The death of your child in the womb is going to be as personal a thing as it is possible to be isn't it? Grievance for something that you have not even had the chance to see and feel with your bare hands is very hard to take. The guilt and sense of not doing your duty to God would be the hardest things to swallow though. We should all respect our duty as humans because we have the ability to take life whenever we want to. Murderers can be put into prison for over 30 years for murder- why should this be any different when we are allowing babies to be killed even though they have brains, bodies, souls and they can feel pain. Questions like this one come into many doctors' minds when talking about the operation that they feel they have a right to give to women. Fecundity and purity give you the possibility of what will result from the action. A lot of pleasure could ensue but pain might also be there to a very real extent. In the case of abortion, we know that a lot of pain is directed to both the baby and the mother so it begs the question 'does the pain outweigh the pleasure in this situation?' ...read more.

It's dilemmas like this that make this topic such a difficult one to give a definitive answer on. There are quite a few problems of relating utilitarianism to abortion. Abortion devalues the human life if you have to say when is a person a person? It's a slippery slope in killing weaker members of society. Bentham however ignores the rights of the minority so you could find his theory as being difficult to apply to abortion seeing as the foetus does not have proper rights until it's born. There are a number of things that are good though about using utilitarianism in this example. Firstly, it's not a religious belief which means it can be used universally without anyone taking offence. Rule utilitarianism gives us a guideline to follow that helps people in dilemmas. It's quite rational to base abortion on pleasure and pain. Any consequentialist approach faces the flaw that it is very difficulty to predict the consequences of abortion. You never know what the foetus will or would have actually achieved in his/her life anyway. The foetus could have grown to be a Mozart that would have given much pleasure to millions of people in the world or, on the other hand, he/she could have developed into a Hitler type figure that sent many innocent Jews to death. We will never actually be able to predict the consequences of our actions so the question is very difficult to answer. However, utilitarianism has many positive features and it provides a logical way to approach an emotive issue. ...read more.