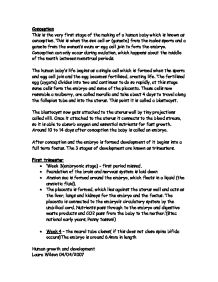 This is the very first stage of the making of a human baby which is known as conception. This is when the sex cell or (gamete) from the males sperm and a

gamete from the woman’s ovum or egg cell join to form the embryo.Conception can only occur during ovulation, which happens about the middle of the month between menstrual periods.

The human baby’s life begins as a single cell which is formed when the sperm and egg cell join and the egg becomes fertilised, creating life. The fertilised egg (zygote) divides into two and continues to do so rapidly, at this stage some cells form the embryo and some of the placenta. These cells now resemble a mulberry, are called morulla and take about 4 days to travel along the fallopian tube and into the uterus. This point it is called a blastocyst.

After conception and the embryo is formed development of it begins into a full term foetus. The 3 stages of development are known as trimesters.

Now that the baby is born, some dramatic changes will take place in all areas of their growth and development, during its first year of life. Below is a month by month guide to how babies grow and develop up until the age of 1 year.

They begin to eat and sleep more regularly, respond to voices, smile at

faces become more alert and look around for longer, cry and vocalize