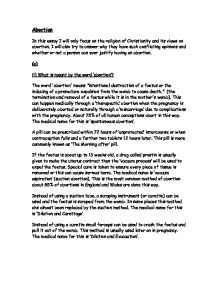 In this essay I will only focus on the religion of Christianity and its views on abortion.

Abortion In this essay I will only focus on the religion of Christianity and its views on abortion. I will also try to answer why they have such conflicting opinions and whether or not a person can ever justify having an abortion. (a) (i) What is meant by the word 'abortion'? The word 'abortion' means "intentional destruction of a foetus or the inducing of a premature expulsion from the womb to cause death." (the termination and removal of a foetus while it is in the mother's womb). This can happen medically through a 'therapeutic' abortion when the pregnancy is deliberately aborted or naturally through a 'miscarriage' due to complications with the pregnancy. About 75% of all human conceptions abort in this way. The medical name for this is 'spontaneous abortion'. A pill can be prescribed within 72 hours of 'unprotected' intercourse or when contraception fails and a further two tablets 12 hours later. This pill is more commonly known as 'The Morning after' pill. If the foetus is about up to 13 weeks old, a drug called prostin is usually given to make the uterus contract then the 'vacuum process' will be used to expel the foetus. Special care is taken to ensure every piece of tissue is removed or this can cause serious harm. The medical name is 'vacuum aspiration' (suction abortion). This is the most common method of abortion about 85% of abortions in England and Wales are done this way. Instead of using a suction tube, a scraping instrument (or curette) can be used and the foetus is scraped from the womb. In some places this method ahs almost been replaced by the suction method. The medical name for this is 'Dilation and Curettage' Instead of using a curette small forceps can be used to crush the foetus and pull it out of the womb. This method is usually used later on in pregnancy. ...read more.

They could do this by voting for someone in an election who promises to make abortions more difficult to obtain. This would be making a start to getting the law changed and therefore clearing the lawful right to have an abortion. There are also many ways in which Christians who are in favour of women being able to have an abortion might put these beliefs into action. Some examples of these actions are... * Again they may pray about the abortion problem. * They may join similar groups like Life only a group which campaigns for the right to choose abortion such as the BMA, the British Pediatric Association or other 'Pro-choice' campaigns. * They might support an organisation which offers counselling for people who have had abortions. * Even if they believe that abortion can sometimes be a sensible choice they may still believe in giving young people a chance to avoid unwanted pregnancies in the first place by giving them a proper sex education. * Again they may express their views about abortion in discussion but this time how they feel it is sometimes the most loving choice, also discouraging other people to criticise women who have chosen to have abortions and pointing out the many reasons people have abortions and why people still have the right to have an abortion. (c) 'Abortion is never justified'. Do you agree? Some people may agree with this statement because... It has been said that a foetus is not a human being; it is merely part of the woman. Whereas, medical science has proved that the foetus is biologically separate from its mother. From the moment the embryo is formed a new individual comes into existence, genetically different from its parents. The development of test tube fertilisation has proven that an embryo can exist outside a female body. All these scientific advances confirm that the unborn is a separate human being. ...read more.

I also believe that it is right to terminate the life of one or more foetuses involved in a multiple pregnancy to preserve the life of other foetuses. Finally, I think that although doctors should consult other doctors, they should not be prosecuted for carrying out an abortion in extreme circumstances. For example, in 1938, Dr Alexander Bourne performed an abortion on a 14 year old girl after a gang of soldiers raped her. Dr Bourne informed the police and was prosecuted. When an abortion is requested, I believe the reasons for the abortion should be evaluated by an impartial body. They should also consider the possible outcomes of the situation, if an abortion takes place, and if it does not. The woman seeking the abortion should not be the only person whose wishes are taken into consideration. The family and father should also be given thought. I do not think that abortion should be made illegal either. If abortion was made illegal, hundreds of women would die trying to solve the 'problem' of an unwanted child by themselves. It would also cause a raped mother to have the baby, which could lead to her hating the child, because it reminds her everyday of her dreadful ordeal. Some women would die if they continued with the pregnancy and need to have the option of terminating the pregnancy available to them. Not having an abortion could also lead to a severely handicapped child being born with no chance of surviving. In my opinion legal abortion should be an available choice for a pregnant woman. I don't class a baby as a living, human being until it is born and so I don't see abortion as murder. I also believe that once the child is born there are very little mothers who will regret going through with the pregnancy and birth no matter what the situation is whether they have financial problems or whether they are just not ready. ...read more.