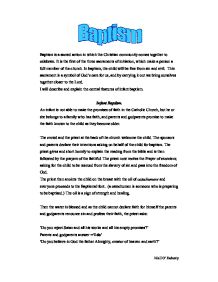 Baptism is a sacred action in which the Christian community comes together to celebrate. It is the first of the three sacraments of initiation, which make a person a full member of the church. In baptism, the child will be free from sin and evil. This sacrament is a symbol of God's care for us, and by carrying it out we bring ourselves together closer to the Lord. I will describe and explain the central features of infant baptism. Infant Baptism. An infant is not able to make the promises of faith in the Catholic Church, but he or she belongs to a family who has faith, and parents and godparents promise to make the faith known to the child as they become older. The crowd and the priest at the back of the church welcome the child. The sponsors and parents declare their intentions asking on behalf of the child for baptism. The priest gives and short homily to explain the reading from the bible and is then followed by the prayers of the faithful. The priest now recites the Prayer of exorcism; asking for the child to be rescued from the slavery of sin and pass into the freedom of God. The priest then anoints the child on the breast with the oil of catechumens and everyone proceeds to the Baptismal font. ...read more.

The child is given the sign of the cross, which is the ultimate symbol of Christianity, the sign by which the infant will live out the rest of its life, believing that Jesus was crucified, died and was buried. Anointing with the oil of Catechumens is a sign of being given strength. Christians today knew that it is very difficult to be a good Christian (even the disciples' denied Jesus when he was arrested) one requires strength to say 'no' to evil such as 'murder'. This is what makes this action important for Christians. Promises made by the parents and godparents on behalf of the candidate because the child is too young. This very significant for the parents and godparents as it serves as a reminder of their beliefs as a Christian such as 'Do you believe in God the Father, God the Son and God the Holy Spirit. This helps to spread the responsibility of Christianity to the wider community. Children will grow up as better Christians as the people around them are good Christian role models. Unfortunately this is not often the case as many parents and godparents do not even take their children to church or ensure they receive the sacraments. The actual baptism with water, this is the focal point of the ceremony. ...read more.

I believe how the child responds to sin will depend on the experiences of Christianity in its home, community and school that brings in a lot of people to help our child become a good Christian. Being baptised in the Catholic Church allows children into Catholic schools and catholic communities, which strive to help the child to be brought up Christianly. Surely we are better baptising children so they can be exposed to Christian life at work in their everyday lives. To me, I believe my parents, brothers, sisters, aunts; uncles, godparents, parents' friends and neighbours had influenced me in the moulding of my Christianity. On the other hand people might say that Jesus was baptized as an adult, which they wish to follow his example. Today, believers' baptism follows the principle that belief in Christ comes before baptism. The ceremony is seen as important because it is an outward sign and declaration of the changes that have taken place in person's life through belief in Jesus Christ. People also might say that the babies are too young for the promises that are made for them and it should be the actual candidates choice. And adults can see for themselves this materialistic world then decide should they follow in the way Jesus lived his life unlike being baptized in your early years with no experience of the world your going to grow into. Niall O' Doherty ...read more.