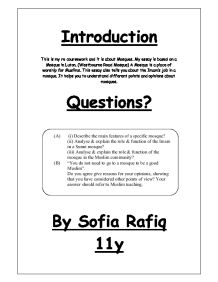 Mosques - a place for worship.

Introduction This is my re coursework and it is about Mosques. My essay is based on a Mosque in Luton. (Westbourne Road Mosque) A Mosque is a place of worship for Muslims. This essay also tells you about the Imam's job in a mosque. It helps you to understand different points and opinions about mosques. Questions? By Sofia Rafiq 11y A (i) Describe the main features of a specific mosque? Mosques have many different beautiful features that are exterior as well as interior. A basic feature of a mosque is a tower called the minaret. In Islamic countries the Muezzin enters the minaret and calls the people to prayer. In Britain this is not allowed so some Islamic communities broadcast the call to prayer on a radio frequency which Muslims can pick up in their homes and places of work using a small receiver. The first thing a person does before entering the mosque is to take off their shoes. There is always a shoe rack outside the mosque for you to place your shoes. Shows are taken of because they are entering a sacred place and it is a sign of reverence to Allah. Also, when a Muslim prays at the mosque at times they put their face on the floor. So there seems to be a sensible aspect to it as well. Muslims who come to the Mosque to pray must perform Wudu before doing so. ...read more.

Imams sometimes perform religious ceremonies, and they will give people religious advice. Some imams also visit Muslims who are in prison. In small mosques the imam may take on these religious responsibilities as well as another job, such as the caretaker of the mosque; in big mosques the imam is usually employed full time. The Imam also organises many activities: educational and religious programmes at the mosque, financial and building projects, an Islamic school for children each evening and midweek classes for other groups occasionally. They may also visit many schools in the area, and speak to many non-Muslim groups. Also the authorised Muslim prison and hospital chaplain in some cases. The imam can be called out of the Mosque for something like visiting a sick person. The imam has to make sure he gives the correct advice to people that seek it and also has to teach Muslims right from wrong when necessary. Many imams are hafizes. This is someone that knows the Quran of by heart. They are respected a great deal. An imam will also help non-believers learn about Islam and increase their knowledge about the religion. Imam's daily task start as early as 3am which would be Morning Prayer. He may then read the Quran for some time before eating breakfast. Imams can also be part of Islamic weddings during the Nikah. This involves contracts being signed. The imam may also go through the rules and regulations of the purpose of marriage in Islam. ...read more.

Therefore, one can offer his Salat at home but male should try to go mosque for Salat and Offering Salat with Jammat provides 27 times greater virtue than personal Salat (Bukhari). Peoples opinions: Different people can carry different views because of their cultures and traditions. Most Muslims feel that it is not compulsory to attend a mosque in order to be a good Muslim because they feel that they can relate and perform prayers at home just as well. Although, some Muslims feel that if you attend a mosque you are a better Muslim because you are part of an Ummah and they think it is important and some prayers (Friday and Eid prayers) cannot be performed at home. In my point of view, I think it is important for males to attend the mosque unless for a valid reason because it is commanded by our prophet (PBUH) for males to offer Salat with jammat. Every Friday is considered a holy day for Muslims. It is compulsory for males to attend the Mosque around mid-day for sermon and prayers. Females can attend but do not have to. Overall, by looking at many different opinions I came to a conclusion, that you do not have to attend a mosque to be a good Muslim, but it is preferred by Islamic teachings for males to attend. The facts of the Qur'an are that its message is a universal message without any differentiation between male and female regarding goodness, observance of religious duty and religious obligations. The attitude of the vast majority of the Muslim jurors is not against women's attendance at the mosque. ...read more.