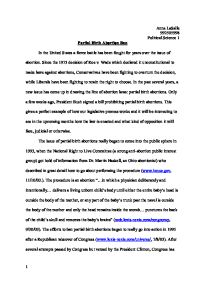 Anna LaSalle 992505998 Political Science 1 Partial Birth Abortion Ban In the United States a fierce battle has been fought for years over the issue of abortion. Since the 1973 decision of Roe v. Wade which declared it unconstitutional to make laws against abortions, Conservatives have been fighting to overturn the decision, while Liberals have been fighting to retain the right to choose. In the past several years, a new issue has come up in drawing the line of abortion laws: partial birth abortions. Only a few weeks ago, President Bush signed a bill prohibiting partial birth abortions. This gives a perfect example of how our legislative process works and it will be interesting to see in the upcoming months how the law is enacted and what kind of opposition it will face, judicial or otherwise. The issue of partial birth abortions really began to come into the public sphere in 1993, when the National Right to Live Committee (a strong anti-abortion public interest group) got hold of information from Dr. Martin Haskell, an Ohio abortionist) who described in great detail how to go about performing the procedure (www.house.gov, 11/10/03.). The procedure is an abortion "...in which a physician deliberately and intentionally... delivers a living unborn child's body until either the entire baby's head is outside the body of the mother, or any part of the baby's trunk past the navel is outside the body of the mother and only the head remains inside the womb... punctures the back of the child's skull and removes the baby's brains" (web.lexis-nexis.com/congcomp, 9/30/03). The efforts to ban partial birth abortions began to really go into action in 1995 after a Republican takeover of Congress (www.lexis-nexis.com/universe/, 7/8/03). After several attempts passed by Congress but vetoed by the President Clinton, Congress has finally been successful in enacting a ban on partial birth abortions. The ban says that this act is a "gruesome and inhumane procedure that is never medically necessary and should be prohibited" (web.lexis-nexis.com/congcomp, 9/30/03) ...read more.

While the factors of ideology, electoral advantage, and legislative influence are all important factors in the reason for a sponsor to propose a policy, in the case of the Partial Birth Abortion Ban, ideology seems the most important. The Ban falls into the traditionally conservative, Republican area of Pro-Life, and therefore it seems to be a good place for a Republican to sponsor a bill. The Ban acts as a perfect example of the values of conservatism: putting order before freedom before equality. The Ban brings the order of prohibiting partial birth abortions before giving the mother the freedom to choose whether or not she wants to have the procedure. Senator Santorum (the bill's sponsor in the Senate) gives a perfect example of the conservative value of order over freedom in the case of abortion "...compare[ing] the Roe decision with the nation's one-time support for slavery, saying both placed 'the liberty rights of some over the life rights of others'" (www.washingtontimes.com/national, 9/8/03). Although the factor of ideology is most important in the sponsorship of the Partial Birth Abortion Ban, the factors of electorate advantage and legislative influence play a role as well. Any political figure is constantly looking to increase their voters support as well as their influence on other important matters in the legislative process. Sponsoring a bill gives the sponsor lots of attention: congressional attention, voter attention, and even presidential attention. This attention gets the sponsor's message out loud and clear to all audiences. This attention can be both positive and negative for the sponsor- positive for those that agree with what the sponsor is proposing, negative for those that do not agree with what the sponsor is proposing. In the case of the Partial Birth Abortion Ban, those that agree with the ban, especially those that are pro choice, are affected positively in two ways. First of all, this gives them an advantage when they are up for reelection because their supporters will want to vote for them. ...read more.

I can't imagine going to all that work to get a bill passed and then having to start over from scratch because the President vetoed the bill. Ideology played a major role in the passing of this policy. The ideology of the bill was strongly conservative, as was the ideology of the men who sponsored the bill. The ideology brought in the voice of many public interest groups, some who held the same ideology, and others who had completely different ideology. I didn't realize how important ideology was until researching this bill. Conservatives were adamant that this bill had to pass because partial birth abortions were morally wrong (www.house.gov, 11/10/03). Liberals were on the opposite end of the spectrum saying that by passing the bill they would be infringing upon constitutional rights (www.aclu.org, 10/21/03). I found it amazing how two groups of people could have such completely opposite views on the same policy. I also found it interesting how much the three branches of government worked to pass the bill. Congress proposed and passed the bill, the President signed the bill, and the Supreme Court has the power to overturn the bill if they find it unconstitutional. Each branch of government has their chance to make some sort of impact on the bill at some point in the process which is good but also makes the process a lot slower. This bill was proposed in February of this year and was not signed by President Bush until November! That is almost a year of working to pass the bill! All in all, I was very impressed by the amount of work that goes into making a bill into a law. Often times our government system is criticized for the lengthy process of policy making, but I believe it is for our benefit. The more each proposal is scrutinized, the more likely it is to be a success. Learning more about the policy making process made me realize that the framers had the right idea when crafting the constitution and we have had many successes because of it. 1 ...read more.