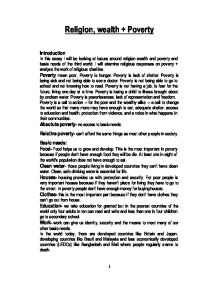 Religion, wealth + Poverty Introduction In this essay I will be looking at issues around religion wealth and poverty and basis needs of the third world. I will examine religious responses on poverty + analyse the work of religious charities. Poverty mean poor, Poverty is hunger. Poverty is lack of shelter. Poverty is being sick and not being able to see a doctor. Poverty is not being able to go to school and not knowing how to read. Poverty is not having a job, is fear for the future, living one day at a time. Poverty is losing a child to illness brought about by unclean water. Poverty is powerlessness, lack of representation and freedom. Poverty is a call to action -- for the poor and the wealthy alike -- a call to change the world so that many more may have enough to eat, adequate shelter, access to education and health, protection from violence, and a voice in what happens in their communities. Absolute poverty- no access to basic needs. Relative poverty- can't afford the same things as most other people in society. Basic needs: Food- Food helps us to grow and develop. This is the most important in poverty because if people don't have enough food they will be die. At least one in eight of the world's population does not have enough to eat. Clean water- those people living in developed countries they can't have clean water. Clean, safe drinking water is essential for life. Houses- housing provides us with protection and security. For poor people is very important houses because if they haven't place for living they have to go to the street. In poverty people don't have enough money for buying houses. Clothes- this is the most important part because if they don't have clothes they can't go out from house. Education- we take education for granted but in the poorest countries of the world only four adults in ten can read and write and less than one in four children go to secondary school. ...read more.

The Arabic word 'Zakah' means to purify or cleanse. Zakah, on the other hand, is a duty performed on a regular basis, and not regarded as a charity. . It is a contribution paid once a year. The aim of paying Zakah is to keep your wealth free of greed and selfishness. This is also a test of Muslim honesty expenditure. Zakah money may only be used for certain set purposes: > To help the poor. > To release from dept. > To help needy travellers. > To free captives. > To win people over to the cause of Allah. It is one of the basic principles of Muslim economy, based on social welfare and fair distribution of wealth. Muslims are expected to tax their income and wealth as a matter of duty, and to hand over a certain proportion on an annual basis to those who are less fortunate. In Islam sharing wealth is not an optional extra; it is something commanded by God in the religious pillars of Zakah. The Zakah is usually collected and sent off during the fast of Ramadan. Zakah will help your relatives to recover from disease by giving charity. Zakah is usually paid in secret so that rich people receive no false praise or admiration, since they are doing no more that their duty; and poor people are not made ashamed in receiving. Muslim pay Zakah annually on the basis of two and a half percent of all their savings and income above the level needed to keep their family. Zakah for Eid-ul-Fitr is a special payment of a set amount, the equivalent of two meals. Every Muslim who is financially able to do this should give this to the poor on behalf of each member of the family. Eid-ul-Adha involves the sacrifice of an animal for the pilgrims on hajj, and is a voluntary act for other Muslims round the world. ...read more.

Some people would agree with this quote because people earned money by working for their self not to help or share with other people. In Christianity Jesus told a parable in the bible about a rich man and poor woman. The rich man gives 5 gold jewelleries and the poor woman gave a silver jewellery to help poor people. Jesus asked people who is most helpful, people said the rich man but Jesus said the poor woman because she gave everything what she had to help people. Conclusion In conclusion I would argue that to get rid of poverty there is a need for world development. In one way rich countries help poor people by giving money to get poor countries resources and poor countries help rich countries by sharing out the resources. The only reason why poor countries helping rich countries because they have the resources but they don't have enough money to develop the resources that's why they have to sell their sources to rich countries and rich countries take the disadvantages of the chance which is really shameful and that's the only reason for wealth and poverty and basis needs to the third world. Rather than buying their resources rich countries should help poor countries by giving money that is they can have it back after poor countries develop their own resources. Our religions teach us to help the poor by giving out charity to make themselves feel good; it's not a selfless act. Religions show us that how hardly people living in developing countries and the difference between helpings in two religious ways. People believe God will be happy with them + they will go to heaven. Religion charities drop in ocean. They help poor people but are not enough for them to sustain life. We need to do things in a huge scale to get rid of poverty. Rather than following Christianity or Islam become a good human being it will help more for poor people to get their basic needs which is their rights to the government and to us. 1 ...read more.