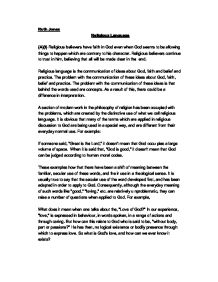 Ruth Jones Religious Language (A)(i) Religious believers have faith in God even when God seems to be allowing things to happen which are contrary to his character. Religious believers continue to trust in him, believing that all will be made clear in the end. Religious language is the communication of ideas about God, faith and belief and practice. The problem with the communication of these ideas about God, faith, belief and practice. The problem with the communication of these ideas is that behind the words used are concepts. As a result of this, there could be a difference in interpretation. A section of modern work in the philosophy of religion has been occupied with the problems, which are created by the distinctive use of what we call religious language. It is obvious that many of the terms which are applied in religious discussion to God are being used in a special way, and are different from their everyday normal use. For example: If someone said, "Great is the Lord," it doesn't mean that God occupies a large volume of space. When it is said that, "God is good," it doesn't mean that God can be judged according to human moral codes. These examples how that there have been a shift of meaning between the familiar, secular use of these words, and their use in a theological sense. ...read more.

To the statement God is good, we need to add the qualifier that God is infinitely good. This will make us think of God's goodness in greater and greater depth until eventually we have an insight into God's goodness, and we will then respond to this insight with awe and wonder. (A)ii) Ludwig Wittgenstein had supported the logical positivists, but he came to reject the Verification principle. He decided that the meaning of words is in their use; the function they perform as agreed by the particular group or society using them. Each activity has its own language. He believed that language's function was to name objects and the meaning of language was found in the objects for which it stands. He later rejected this and centred on how language works and is used, believing that problems of religious language come from misunderstanding its usage. Wittgenstein was no longer concerned with the truth or falsity of language but the way it is used and the functions that it performs, as he said 'Don't ask for the meaning ask for the use.' Wittgenstein recognised that language is equivocal as words have many different meanings, such as the word 'pen' whose meaning changes in different contexts. He saw language as a game, which like all games had its own set of rules. Different contexts or 'forms of life' are like different language games with their own self-contained rules. ...read more.

It seems that Wittgenstein was mistaken as seeing religious language only being intelligible in the context of religious belief. Many religious statements entail a truth which is not dependent upon context, but statements such as 'Jesus died to bring salvation' are though of as true for everyone. Also Non-believers might be able to understand religious language better than believers. This is because non-believers have an objective view of the use of religious language. Felicity McCutcheon drew some parallels between games and language. This led some to the view that each language games is immune from charges of incoherence and irrationality because it has its own internal criteria of coherence and intelligibility. This presents the danger that each area of life develops its own unique criteria of truth and meaning. McCutcheon illustrates this with the question 'Was Jesus God?', for Neo-Wittgensteinians this cannot be given a yes/no answer but depends on which language 'game' you are in, for instance either the Jewish or Christian game. Fideism (associates with Luther and Kierkegaard) argues that faith is immune to rational investigation and can be internally justified. In addition the Neo-Wittgensteinian account of religious language has made the controversial claims that it cannot be understood as reality depicting. It should be noted that Wittgenstein never made this judgement. However, many feel that religious statements do entail a truth that is not entirely dependent on the context. Indeed many religious claims are claims that are believed to be true for everyone, for example, the claim in Christianity that Jesus died in order to bring salvation. ...read more.