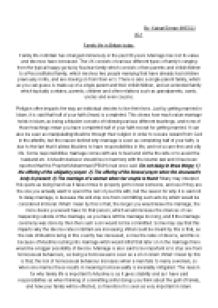 ﻿By: Kainat Emran 9HESC/9G1 Family life in Britain today. Family life in Britain has changed immensely in the past 50 years. Marriage has lost its value and divorces have increased. The UK consists of various different types of family?s ranging from the typical happy-go-lucky Nuclear family which consists of two parents and child/children to a Reconstituted family, which involves two people marrying that have already had children previously in life, and are moving on from their ex?s. There is also a single parent family, which as you can guess is made up of a single parent and their child/children, and an extended family which typically contains, parents, children and other relations such as grandparents, aunts, uncles and even cousins. Religion often impacts the way an individual decides to live their lives. Just by getting married in Islam, it is said that half of your faith (Iman) is completed. This shows how much value marriage holds in Islam, as being a Muslim consists of following various different teachings, and none of those teachings mean you have completed half of your faith except for getting married. It can also be seen as manipulating Muslims through their religion in order to receive reward from God in the afterlife, but the reason behind why ...read more.

married, and compares having a wife to a ?treasure? showing how valued and how important part a wife plays in Christian family life. It also persuades Christians to get married by saying that they will receive favour from the Lord if they do get married, though it does not say that any favour will be reduced by not getting married. This impacts family life for Christians as if they believe that having a wife will mean pleasing the Lord and having a better life, then they are more likely to marry, rather than co-habit, as marrying brings more reward than co-habiting and it is more or less living the same anyway. What is meant by this is that, the only difference is that if children are conceived in marriage it will be legitimately, rather than illegitimately if co-habiting, as sex before marriage in Christianity is also considered a sin and frowned upon, even though it seen to be more common in recent years. But even though some aspects of Christian family life are similar to Islam, some are not. For example it is acceptable in Islam for a couple to divorce, due to it not working out etc. ...read more.

As well as this there are many more couples who are cohabiting instead of getting married, which would have been frowned upon in the past as well, whether this is due to the current economic state of Britain, and people cannot afford their dream wedding, or if they are not serious enough about the relationship, and don?t want to risk going through a divorce after committing themselves to marriage it is unknown. In my opinion, family life is still important as it was previously, but it is just the way in which the families are living which has changed. What I mean is that, it is still significant for children to have parents, and see their parents, and be with their parents just as it was fifty years ago, but this does not have to mean the parents have to be married like it was typically fifty years ago, as they can be co-habiting. This has changed from previous years due to if it was the same type of circumstance fifty years ago it wouldn?t be supported in society and you would be thought as ?bad?, ?irresponsible? and ?careless? parents. I think that family values have not changed; it is just the way in which the family are living that has changed and the family types are more varied then they were fifty years ago. ...read more.