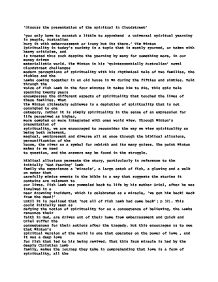 Tim Winton in his 'quintessentially Australian' novel Cloudstreet challenges modern perceptions of spirituality with his rhythmical tale of two families, the Pickles and the Lambs

'Discuss the presentation of the spiritual in Cloudstreet' 'you only have to scratch a little to apprehend a universal spiritual yearning in people, Australian bury it with embarrassment or irony but its there.' Tim Winton Spirituality in today's society is a topic that is mostly spurned, or taken with heavy criticism, and is treated thus such despite the yearning by many for something more, in our money driven materialistic world. Tim Winton in his 'quintessentially Australian' novel Cloudstreet challenges modern perceptions of spirituality with his rhythmical tale of two families, the Pickles and the Lambs coming together in an old house in WA during the fifties and sixties. Told through the voice of Fish Lamb in the four minutes it takes him to die, this epic tale spanning twenty years encompasses the different aspects of spirituality that touched the lives of these families. What Tim Winton ultimately achieves is a depiction of spirituality that is not consigned to one category, rather it is simply spirituality in the sense of an expression for life perceived as higher, more complex or more integrated with ones world view. Through Winton's presentation of spirituality, we are encouraged to reconsider the way we view spirituality as being both relevant, magical, omnipresent and diverse all at once through the biblical allusions, personification of the house, the river as a symbol for rebirth and its many guises. ...read more.

Through the former Christian Oriel's acceptance of these strange events, we learn from her change in ideas that we shouldn't be closed to thoughts of the seemingly absurd in the spiritual realm. This is reiterated in the haunted room as Rose has her baby, Wax Harry, and she feels 'the spirits on the walls are fading.... finally being forced on their way to oblivion freeing the house' and the positive forces of love obliterate the evil. We are guided by these examples to see that, as the characters embraced their spirituality by being open to the mysteries in life, grace comes to them, unbidden and unsought, in the form of being able to see the light that was always there. Through the house being personified, Winton gives readers an overwhelming impression that where spirituality is found is not important, rather it is that it is acknowledged, which Oriel and Rose eventually discover. The 'water' in Winton's work is shown as inherently spiritual, it is integral to the lives of the characters and symbolises miracles, paradise, regeneration, revelations all whilst existing outside a linear time. However, it is when Quick and Fish journey down the river at night that the distinction is clearly made between the water metaphorically and in the literal sense, both of which reveal to readers different meanings of spirituality. ...read more.

Cloudstreet is a book of celebration of everything to do with life, and spirituality is an integral part of our existence. Although it can be said that Winton certainly has a biblical bent, he allows us to consider the different aspects of spirituality by presenting to readers an eclectic amalgam of traditional Christian values, working class superstitions, aboriginal spirituality and the supernatural. The biblical allusions allow us to see that events in the bible are indeed relevant to our life, in the same way they can be used as a catalyst for acceptance of spirituality. The house and the river being personified reinforces that spirituality can be found in inanimate objects, or indeed anywhere, whilst the fatalist point of view reiterates that there is another realm. Cloudstreet overwhelmingly presents a view that it does not matter how one interprets spirituality, as long as one acknowledges it in your own way for the search for meaning in life is inescapable. Whether the world operates on love, luck or God, Tim Winton presents spirituality as being part of a life that is 'holy and somehow integrated.' Interview with Tim Winton by Andrew Taylor Miels, Y, Singing the Great Creator (Reading Tim Winton) Miels, Y, Singing the Great Creator (Reading Tim Winton) Collins dictionary, (2004) Quin, Rodd, (2004), Ideology in Cloudstreet, English teachers association of W.A. ...read more.