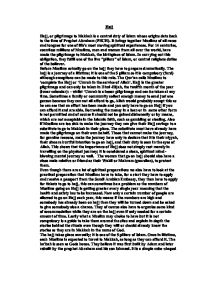 Hajj Hajj, or pilgrimage to Makkah is a central duty of Islam whose origins date back to the time of Prophet Abraham (PBUH). It brings together Muslims of all races and tongues for one of life's most moving spiritual experiences. For 14 centuries, countless millions of Muslims, men and women from all over the world, have made the pilgrimage to Makkah, the birthplace of Islam. In carrying out this obligation, they fulfil one of the five "pillars" of Islam, or central religious duties of the believer. Before Muslims actually go on the hajj they have to prepare dramatically. The hajj is a journey of a lifetime; it is one of the 5 pillars so it is compulsory (fard) although exceptions can be made to this rule. The Qur'an calls Muslims to 'complete the Hajj or 'Umrah in the service of Allah'. Hajj is the greater pilgrimage and can only be taken in Dhul-Hijah, the twelfth month of the year (lunar calendar): - whilst 'Umrah is a lesser pilgrimage and can be taken at any time. Sometimes a family or community collect enough money to send just one person because they can not all afford to go, Allah would probably accept this as he can see that an effort has been made and you only have to go on Hajj if you can afford it and are able. Borrowing the money in a loan or in some other form is not permitted and of course it should not be gained dishonestly or by means, which are not acceptable in the Islamic faith, such as gambling or stealing. Also if Muslims are too sick to make the journey they can give their Hajj savings to a substitute to go to Makkah in their place. The substitute must have already have made the pilgrimage on their own behalf. Those that cannot make the journey, for genuine reasons, make the journey have only to declare that it is their niyyah, their sincere hurtful intention to go on hajj, and their duty is seen in the eyes of Allah. ...read more.

As the pilgrims have, at this stage, finished a major part of the Hajj, they are now allowed to shed their Ihram and put on everyday clothes. On this day Muslims around the world share the happiness the pilgrims feel and join them by performing identical, individual sacrifices in a world-wide celebration of 'Id al-Adha, "the Festival of Sacrifice." Men either shave their heads or clip their hair, and women cut off a symbolic lock, to mark their partial deconsecration. This is done as a symbol of humility. All Muslims, on finishing the Hajj must perform Tawaf (circling the Kab'ah) a last time. This must be the last thing that is done in Mecca. Although this is the end of the hajj some Muslims may choose to stay a little longer and perform some of the rituals again if they feel the need to, the majority of Muslims will return to there respective homes and feel spiritually refreshed, for many Muslims the experience will change their whole life's, they may change there whole lifestyle as they now know that their slate is clean and they want to live the best life possible to prepare themselves for paradise. Part B) How does Hajj effect a person, and what effect does it have on a Muslim's feelings. The Hajj has great importance and significance for all the Muslims that take part. It is a great feeling of importance for all Muslims, the Hajj also has spiritual and physical meaning to the whole religion and the people within it, in a way it is the building block of the Islamic faith. The completion of hajj fills all Muslims with great achievement and significance. For a start the Muslim or Muslims that complete Hajj have completed one of the five pillars, if the Muslims have already completed or are obeying the five pillars then they can feel I sense of completion and total submission to Allah, they can now look forward to their day of judgement knowing that they have a clean slate and are spiritually clean. ...read more.

really receive the same pleasure from simply sitting at home and praying to Allah and in all fairness they would have a fair point in saying all of this. The last I example I shall give is a linked opinion, Muslims alike will agree that the whole planning and then accomplishment of Hajj gives the sense of complexion and its like a weight has been lifted from your life and you can just look forward to the day of judgement, also when on the pilgrimage Muslims have to put in a whole load of physical hardship and effort to fulfil the purpose and by doing this they are showing their total submission to Allah and they would argue that this submission cannot be reached or achieved unless you have actually made the journey in person rather than mind. So there are several reasons for either side of the argument, which do you go with? I think that upon going through the different reasons on either side it all depends on the person, yes the physical hardship is extremely important if you are actually able to make the journey but there are going to be cases where people are not able to make the journey for one reason or another and if this is the case then surely Allah would recognise this and allow the journey to be made spiritually as he does not wish to punish or bring harm to Muslims in any way possible he just wants them to follow the religion and if you can do this through mind then in my mind he should be able to accept this. So my final decision is that I believe the Hajj is more importantly a spiritual journey more than it is a physical but in the end nobody can know until they reach their day of judgement and if they are sound at heart and have made their peace with Allah then they have nothing to worry about when they reach their day. ...read more.