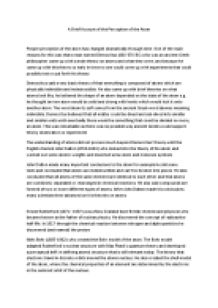 A Brief Account of the Perception of the Atom

﻿A Brief Account of the Perception of the Atom People perception of the atom has changed dramatically through time. One of the main reasons for this was that a man named Democritus (460-370 BC) who was an ancient Greek philosopher came up with a main theory on atoms and what they were, and because he came up with this theory so early in time no one could come up with experiments that could possibly test or put forth his theory. Democritus said a very basic theory of that everything is composed of atoms which are physically indivisible and indestructible. He also came up with brief theories on what atoms look like, he believed the shape of an atom depended on the state of the atom e.g. ...read more.

who looked into the theory of the atom and worked out some atomic weights and invented some atom and molecule symbols. John Dalton made many important conclusions to the atom for example he did some tests and concluded that atoms are indestructible and can?t be broken into pieces. He also concluded that all atoms of the same element are identical to each other and that atoms are combined, separated or rearranged in chemical reactions. He also said compounds are formed of two or more different types of atoms. After John Dalton made his conclusions many scientists then advanced on his theories on atoms. Ernest Rutherford (1871? 1937) was a New Zealand-born British chemist and physicist who became known as the father of nuclear physics. ...read more.

Sir James Chadwick (1891?1974) who was an English Nobel laureate in physics awarded because he discovered the neutron. He discovered the neutron in 1932. This eventually led to the possibility and the reality of the Nuclear Bomb. Sir James once wrote, ? I realised that a nuclear bomb was not only possible, it was inevitable. I had to then take sleeping pills. It was the only remedy." And this perception has changed the world and will no doubt change even more as our scientific knowledge increases quicker due to computer processing powers. It has already affected the way we create energy as we now have over 400 nuclear power stations and it has also affected the way we communicate and fight each other as the threat of nuclear war is real. ...read more.