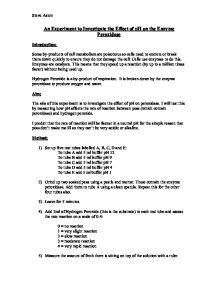 An Experiment to Investigate the Effect of pH on the Enzyme Peroxidase.

An Experiment to Investigate the Effect of pH on the Enzyme Peroxidase Introduction: Some by-products of cell metabolism are poisonous so cells need to excrete or break them down quickly to ensure they do not damage the cell. Cells use enzymes to do this. Enzymes are catalysts. This means that they speed up a reaction (by up to a million times faster) without being used up. Hydrogen Peroxide is a by-product of respiration. It is broken down by the enzyme peroxidase to produce oxygen and water. Aim: The aim of this experiment is to investigate the effect of pH on peroxidase. I will test this by measuring how pH affects the rate of reaction between peas (which contain peroxidase) and hydrogen peroxide. I predict that the rate of reaction will be fastest in a neutral pH for the simple reason that peas don't make me ill so they can't be very acidic or alkaline. ...read more.

Measure the amount of froth there is sitting on top of the solution with a ruler. Results: pH Rate of Reaction Amount of froth (mm) 12 0 1 9 3 30 7 4 32 4 2 9 1 1 4 Conclusion: My results show that enzymes are affected by pH. As I predicted, peroxidase works fastest at a neutral pH because pH 7 showed the most extreme reaction. Conversely, more extreme pHs have lower rates of reaction. I am surprised that pH 9 had such a high rate of reaction, but this may show that the enzyme peroxidase can work in slightly acidic environments also. However, the sudden drop in the rate of reaction at pH 12 may to contradict this theory so it maybe that either one or both of the results for pHs 9 and 12 are anomaly. ...read more.

If there was more perioxidase in one test tube that another, then the rate of reaction will be faster as there will be more collisions. Also, some peas may have been ground up more effectively than others so more of the enzyme was available. The experiment could have been improved if I could have used a certain amount of enzyme rather than the relatively inaccurate measurement of two peas. One of the biggest flaws in my experiment is that my measurements for rate of reaction were merely based on perception rather than an objective measurement. The experiment would have been better had I measured something objective, such as heat produced by the reaction. Either of the results for pH 9 or 12 could be anomaly. These could be explained firstly by the fact that some peas probably contained more peroxidase than others and secondly that my measurements were subjective. Steve Aston ...read more.