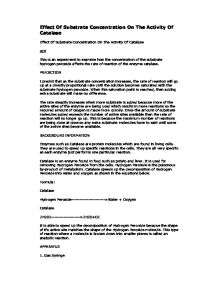 Effect Of Substrate Concentration On The Activity Of Catalase

Effect Of Substrate Concentration On The Activity Of Catalase Effect Of Substrate Concentration On The Activity Of Catalase AIM This is an experiment to examine how the concentration of the substrate hydrogen peroxide affects the rate of reaction of the enzyme catalase. PREDICTION I predict that as the substrate concentration increases, the rate of reaction will go up at a directly proportional rate until the solution becomes saturated with the substrate hydrogen peroxide. When this saturation point is reached, then adding extra substrate will make no difference. The rate steadily increases when more substrate is added because more of the active sites of the enzyme are being used which results in more reactions so the required amount of oxygen is made more quickly. Once the amount of substrate molecules added exceeds the number of active sites available then the rate of reaction will no longer go up. This is because the maximum number of reactions are being done at once so any extra substrate molecules have to wait until some of the active sites become available. BACKGROUND INFORMATION Enzymes such as Catalase are protein molecules which are found in living cells. They are used to speed up specific reactions in the cells. They are all very specific as each enzyme just performs one particular reaction. Catalase is an enzyme found in food such as potato and liver. It is used for removing Hydrogen Peroxide from the cells. Hydrogen Peroxide is the poisonous by-product of metabolism. Catalase speeds up the decomposition of Hydrogen Peroxide into water and oxygen as shown in the equations below. Formula: Catalase Hydrogen Peroxide---------------------->Water + Oxygen Catalase 2H2O2------------------->2H2O+O2 It is able to speed up the decomposition of Hydrogen Peroxide because the shape of it's active site matches the shape of the Hydrogen Peroxide molecule. This type of reaction where a molecule is broken down into smaller pieces is called an anabolic reaction. ...read more.

In my experiment the substrate was the hydrogen peroxide, the enzyme that we used was hydrogen peroxide and the product that was formed was oxygen and water. This can be explained by an equation: Enzyme + Substrate � Product In my experiment this is shown as: Catalase + H202� H202 + 02 This equation explains how the catalase in our experiment binded with the H202 to break it down and form oxygen. Induced Fit Theory The induced fit theory states that the binding of a substrate to an enzyme causes a change in the shape of the enzyme. The enzyme and the substrate act on each other to affect the making of the active site to the usual complex between the enzyme and its substrate. As a result, this means the enzyme to catalyze a reaction has changed. This shows that enzymes are specific for specific substrates. I can tell that the catalase in my experiment is a suitable enzyme to break down the H202 as it will form oxygen as a product which is unharmful Denaturing Denaturing is the damage to the protein structure of an enzyme. Most enzymes react faster as the temperature increases. Enzymes also react at low temperatures, but when the temperature rises above 40 C their reaction rate start to decrease. This is because enzymes are proteins and their structures get damaged when the temperature rises above 40 C. When the protein is denatured it becomes less effective as a catalyst and soon the enzyme reaction gets slower and then finally it stops. This is why enzymes in washing powders which clean by breaking down grease and other stains, cannot be used with hot water above 40 C Activation Energy In order for a reaction too occur activation energy must be supplied. The activation energy is the energy required to start a chemical reaction. Some elements and compounds react together to bring themselves into contact. For others it is necessary to supply energy in order to start the reaction. ...read more.

The results are accurate because a narrow measuring cylinder was used, so the volume measured is more accurate. Hot and cold water were mixed to achieve accurate temperatures. An anomalous results occurred during the repeat reading of the 10�C experiment, the reading at 90 seconds is higher than that at 120 seconds. This reading was ignored when taking the average so It does not affect the analysis. It occurred because the measurement was misread, it may have been 0.1 cm3, instead of 0.2 cm3. Another anomalous result occurred during the first taking of the 50�C experiment, gas was released at 210 seconds when the experiment seemed to have stopped. The gas may have been trapped in the delivery tube and should have been released earlier in the experiment. This was taken into account when drawing the best fit line on the graph, so does not affect the analysis. The method used was good enough to achieve reliable readings , but it can be improved by measuring the mass of the gas lost, this would be more accurate as digital readings would be taken. Using a smaller frequency and a larger range of temperatures would give more evidence for the conclusion. However would require more time and equipment. Other improvements are, using thinner measuring cylinders, to measure out the hydrogen peroxide and the gas produced. Using a thermocouple thermometer to accurately measure the temperature. The hydrogen peroxide took time to heat up as the test tube is glass and is insulated. Using a better material would save time and would have allowed the plan to be completed. Using electronic equipment to take readings a exactly 30 seconds, would eliminate human error. Further work that would extend the investigation and give more evidence to the conclusion would be, to use different concentrations of hydrogen peroxide and lengths of potato, to see how these affect the rate of reaction. Using other substances with catalase, like liver, to see how enzyme concentration affects the rate. ...read more.