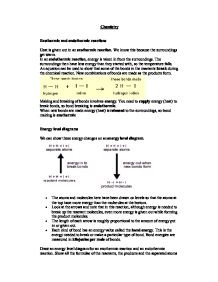 Chemistry Exothermic and endothermic reactions Heat is given out in an exothermic reaction. We know this because the surroundings get warm. In an endothermic reaction, energy is taken in from the surroundings. The surroundings then have less energy than they started with, so the temperature falls. An equation can be used to show that some of the bonds in the reactants break during the chemical reaction. New combinations of bonds are made as the products form. Making and breaking of bonds involves energy. You need to supply energy (heat) to break bonds, so bond breaking is endothermic. When new bonds are made energy (heat) is released to the surroundings, so bond making is exothermic Energy level diagrams We can show these energy changes on an energy level diagram. * The atoms and molecules here have been drawn on levels so that the atoms at the top have more energy than the molecules at the bottom. * Look at the arrows and note that in this reaction, although energy is needed to break up the reactant molecules, even more energy is given out while forming the product molecules. * The length of each arrow is roughly proportional to the amount of energy put in or given out. * Each kind of bond has an energy value called the bond energy. This is the energy needed to break or make a particular type of bond. Bond energies are measured in kilojoules per mole of bonds. Draw an energy level diagram for an exothermic reaction and an endothermic reaction. Show all the formulae of the reactants, the products and the separated atoms Questions and Answers Here is a big question which involves calculation. You need to be able to do this in exam conditions. You will need a calculator. Methane burns in oxygen to form carbon dioxide and water: Question 1 How much energy is needed to break a mole of methane into atoms? Teacher's Note Work out the energy of the four bonds in methane. ...read more.

Questions and Answers The basis of the Haber process for making ammonia is the following reaction: N2(g) + 3H2(g) 2NH3(g) Question 1 What does this sign mean? The Answer An equilibrium reaction. Examiner's Note Well done. It also means a reversible reaction. All equilibrium reactions are reversible - they can be reversed by changing the conditions in a particular way. Question 2 What will happen in the reaction if ammonia is removed? The Answer More ammonia is formed. Examiner's Note Well done. Removing ammonia upsets the balance of the reaction. Some more hydrogen and nitrogen need to combine to get the balance back again. If you continue to remove the ammonia, the hydrogen and nitrogen will eventually be used up. Question 3 What will happen to the yield of ammonia if the temperature is lowered? The Answer It increases the yield. Examiner's Note Well done. For an exothermic reaction, we know that increasing the temperature decreases the amount of product (ammonia). So decreasing the temperature must have the opposite effect. Further things to do On a revision card opy out these equations and effects of pressure on the equilibrium. Equation Effect of increasing pressure N2(g) + 3H2(g) 4 molecules 2NH3(g) 2 molecules More ammonia is formed. Increasing the pressure pushes the reaction in the direction of fewer molecules. N2O4(g) 1 molecules 2NO2(g) 2 molecules More N2O4(g) is formed. Increasing the pressure pushes the reaction in the direction of fewer molecules. H2(g) + I2(g) 2 molecules 2HI(g) 2 molecules No effect, because there are the same number of molecules on each side of the equation. * Draw some more seesaw balance diagrams to see in which direction the reaction 'goes' when: o more reactants are added o more products are added o the reactants are removed Exam Tips * The fact that there are constant concentrations of reactants and products at equilibrium does not mean there are same amounts of products and reactants. ...read more.

This can react with water containing dissolved carbon dioxide gas, to give calcium hydrogen carbonate, Ca(HCO3)2: Because calcium hydrogen carbonate is soluble in water, the limestone rock begins to dissolve. Small particles are transported to the sea bed where they are gradually compressed. Rocks can be pushed out of the ground or forced deep underground due to giant forces within sections of the Earth's crust. Rocks can be crushed or broken up by deformation processes within the Earth's crust. All of these forces work together in the rock cycle, shown below: Measuring processes in the rock cycle How are scientists and geologists able to follow the processes occurring within the rock cycle? By looking at the different layers in the rock, geologists are able to see what type of rocks or particles are in each of the layers. Deeper layers tend to be made up of the oldest materials. Fossils are often trapped within the layers of rock (what type of rock do you think is going to contain the fossilised remains of dead organisms?). We can then compare the type of fossils found with information we already have about the kind of organisms that existed at a certain period in time. Because much of the material at the Earth's core is radioactive, many rocks will also contain a certain amount of these radioactive substances. This radioactivity means that some elements are unstable. The nucleus of a radioactive atom will have a tendency to fall apart. As it does so it will release some energy. Both the type of element and the energy it releases can be detected by various methods. Radioactive substances decay (break down) into simpler substances over time - the older the sample, the less radioactive material there will be left in it. We can compare the amounts of radioactive and non-radioactive material in a rock to get some idea of the rock's age. Common elements to look for are uranium, potassium or rubidium Exam Tips Try to draw the diagram of the rock cycle from memory. When you think you have got it right, check the diagram again ...read more.