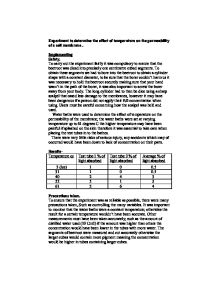 Experiment to determine the effect of temperature on the permeability of a cell membrane .

Experiment to determine the effect of temperature on the permeability of a cell membrane . Implementing Safety. To carry out the experiment fairly it was compulsory to ensure that the beetroot was diced into precisely one centimetre cubed segments. To obtain these segments we had to bore into the beetroot to obtain a cylinder shape with a constant diameter, to be sure that the borer couldn't harm us it was necessary to hold the beetroot securely making sure that your hand wasn't in the path of the borer, it was also important to screw the borer away from your body. The long cylinder had to then be dice using a sharp scalpel that cased less damage to the membranes, however it may have been dangerous if a person did not apply their full concentration when using. Users must be careful concerning how the scalpel was held and used. Water baths were used to determine the effect of temperature on the permeability of the membrane; the water baths were set at varying temperature up to 61 degrees C the higher temperature may have been painful if splashed on the skin therefore it was essential to take care when placing the test tubes in to the bathes. ...read more.

The Individuality of the beetroot may have caused our results to be different from other peoples in the class. Just like humans have different amounts of pigment in their skin so do beetroot, our specific beetroot may have contained less pigment. Therefore causing the % of light absorbed to be lower. Effect of limitations I don't believe that these limitations will have a great affect on the over all results of our experiment, due to the fact that the results we have obtained from the original and repeat were very similar in most cases. Although there are some anomalous results, this does not seem to have affected the average as it still increases with the increase of the temperature. Which would have been expected due to the temperature increasing the permeability of the beetroot cell membrane allowing more pigment to pass through. The wider range of temperatures would have enabled us to pin point the temperature at which the cell membrane becomes denatured, which would of made the experiment more accurate, however this didn't affect our experiment a lot because we were investigating the effect of temperature on a cell membrane which can be clearly seen by our results. The reliability of our apparatus didn't affect us either because the result increase as we would of expected. The accuracy of our results could be tested against other groups or against other repeats. ...read more.