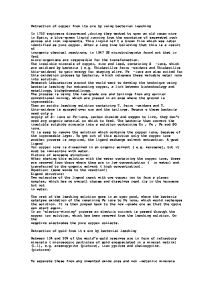 Extraction of copper from its ore by using bacterial leaching

Extraction of copper from its ore by using bacterial leaching In 1752 engineers discovered ,during they wanted to open an old roman mine in Spain, a blue-green liquid running from the mountains of excavated rock across old iron implements. This liquid left a brown film which was later identified as pure copper. After a long time believing that this is a result of inorganic chemical reactions, in 1947 US microbiologists found out that in fact micro-organisms are responsible for the transformation. The insoluble minerals of copper, zinc and lead, containing S -ions, which are oxidised by bacteria ( e.g. Thiobacillus ferro-oxidans and Thiobacillus thio-oxidans) to gain energy for staying alive. Fe -ions are also suited for this oxidation process by bacteria, which releases these valuable metal ions into solution. Research laboratories around the world want to develop the technique using bacteria leaching for extracting copper, a link between biotechnology and metallurgy, biohydrometallurgy. The process is using the low-grade ore and tailings from any earlier conventional mining, which are placed in an area where the ground is impermeable. ...read more.

Ligand structure: Two molecules of the ligand react with one copper ion to form a planar complex, which has no overall charge and dissolves readily in the kerosene but not in water. The rest of the leaching solution goes in an open pond, where the bacteria catalyse oxidation of the remaining Fe ions to Fe ions, which would recharges the solution. It is then pumped back to the low-grade ore so that the cycle can start again. In an 'electro-winning' process an electric current is passed through the copper ion solution, which has been removed from the leaching solution. On the negative electrodes the pure copper collects. Extraction of gold from its ore by bacterial leaching Between 15% and 30% of the world's gold reserves are in form of refractory minerals ( microscopic particles of gold encapsulated in a mineral matrix) (1.1), e.g. arsenopyrite (picture), iron pyrites and chalcopyrite. (pictures) To separate these from any unwanted oxide ores and non-metallic minerals usually froth flotation is used. ...read more.

acid and causes the precipitation of a gelatinous mixture of iron(III) arsenates and iron oxohydroxide (FeO(OH)), together with gypsum (CaSO 2H O). The stable arsenic compound arising from the mixture is iron(III) arsenate(V) dehydrate. The overall oxidation can be shown in this equation: Much better results are produced with an isolation of a mixed culture of moderately thermophilic bacteria. This one has its best working temperature at 46 degree and can greatly enhancing the percentages of gold extracted. Diagram Advantages and Disadvantages Advantages: it is cheaper and less polluting, you can use the bacteria in a cycle ( leaching solution is recycled), it isn't so energy intensive. Researches are made to make the process completely biological, because of other methods, resources became exhausted Disadvantage: takes a long time, still the process of electro-winning is costly, These bacteria were given the name - ferrooxidans for their action in oxidizing iron sulfides. A second set of bacteria were also identified and given the name - thiooxidans for their action in oxidizing sulfur to yield sulfuric acid. Most commercial operations leaching copper from ore dumps are located in the Southern Hemisphere in Australia, Chile, Myanmar and Peru. . ...read more.