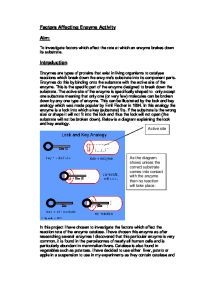 Factors Affecting Enzyme Activity Aim: To investigate factors which affect the rate at which an enzyme brakes down its substrate. Introduction Enzymes are types of proteins that exist in living organisms to catalyse reactions which break down the enzyme's substrate into its component parts. Enzymes do this by binding onto the substrate with the active site of the enzyme. This is the specific part of the enzyme designed to break down the substrate. The active site of the enzyme is specifically shaped to only accept one substrate meaning that only one (or very few) molecules can be broken down by any one type of enzyme. This can be illustrated by the lock and key analogy which was made popular by Emil Fischer in 1894. In this analogy the enzyme is a lock into which a key (substrate) fits. If the substrate is the wrong size or shape it will not fit into the lock and thus the lock will not open (the substrate will not be broken down). Below is a diagram explaining the lock and key analogy. In this project I have chosen to investigate the factors which affect the reaction rate of the enzyme catalase. I have chosen this enzyme as after researching several enzymes I discovered that this particular enzyme is very common, it is found in the peroxisomes of nearly all human cells and is particularly abundant in mammalian livers. Catalase is also found in vegetables such as potatoes. I have decided to use either liver, potato or apple in a suspension to use in my experiments as they contain catalase and can be suspended in water so I can conduct my experiments with relative ease. Although oxygen is vital for human survival excess oxygen is in fact very dangerous to the human body. Within the cells electrons are continually shuttled around by carrier molecules. When oxygen molecules collide with these carrier molecules they can react to form compounds which are often dangerous. ...read more.

To control pH I will add a pH buffer to the liver suspension buffering the pH at seven. I have chosen seven as it is neutral and therefore should not affect my experiments. I will also test the pH of the liver suspension at the start of each experiment using universal indicator if the paper turns light green I will know the pH is seven. To ensure that my apparatus is in working order I will ensure that I assemble the apparatus well and double check that all connections are well made and are therefore as air tight as possible. This will mean that any all gas produced goes into the gas cylinder and does not escape the apparatus so that my results are accurate. Given that all substance concentration that I will ask for will be mixed by the school biology department I cannot be sure exactly what is in them so unfortunately I will have to trust that all the substances I use are what they should be. Before using any of my substances I will stir them for ten seconds using a glass rod, this is to ensure that there is an even distribution of liver in my suspension so my results are accurate. Also, I will always use the same concentration of 10 vols hydrogen peroxide. Another factor which could affect my results is human error. When I am conducting my experiments it is possible that I could inaccurately measure my substances and I could start the stop clock at the wrong time. To accurately measure all of my substances I have chosen the most accurate apparatus to measure them with. I will measure as closely as is possible with the human eye measuring my liver suspension accurate to the nearest 0.01cm3 and my hydrogen peroxide to the nearest 0.1cm3. Also, when injecting my hydrogen peroxide I will inject it as quickly as possible so the full amount is in the boiling tube as soon as possible. ...read more.

I would not add a buffer to control the pH as the chemicals in the buffer could interfere with the reaction and alter my results. I would measure out 0.2cm3 of the suspension using a 1 cm3 syringe being as accurate as is possible with the naked eye when measuring. I would inject this suspension into the side arm boiling tube and replace the bung. I would then use the 5cm3 syringe to measure out 5cm3 of hydrogen peroxide. I would place the syringe into the bung and ensure that all my apparatus is air tight. I would then quickly inject all of the hydrogen peroxide into the boiling tube whilst simultaneously starting the stop clock. I would then record the amount of gas collected in the gas cylinder at ten second intervals for a period of two minutes. I would then repeat each experiment three times for each temperature. I would record all my results on a table. After collecting my results I would go on to test a different temperature until I have three sets of data for five different temperatures. I would then tabulate these results and use the average results for each experiment to plot a graph of my results allowing me to analyse them easily. Taking the average of three experiments for each suspension would give me more reliable results as it will reduce the affect of anomalous results. Also, to ensure that all my tests are fair I would endeavour to use exactly the same conditions for each experiment by maintaining a constant concentration of liver suspension and hydrogen peroxide and by measuring all substances as accurately as is possible. I would also ensure that my apparatus is set up in exactly the same way for each experiment. I would then move on to plot a graph of amount of gas produced against time with a line on the axes for each of my five temperatures. After analysing this graph I would plot a graph of rate of reaction after thirty seconds of reacting against temperature and analyse this graph. ...read more.