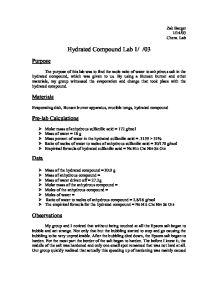 Find the mole ratio of water to anhydrous salt in the hydrated compound.

Not only that but the bubbling started to stop and go causing the bubbling to be very unpredictable. After the bubbling died down, the Epsom salt began to harden. For the most part the border of the salt began to harden. The before I knew it, the middle of the salt was hardened and only one small spot remained that was not hard at all. Our group quickly realized that actually this speeding up of hardening was mainly caused by the increase in temperature from the Bunsen burner. Soon all the surrounding areas of the salt became dry and formed a white crust. After observing the reaction of the salt when heat was applied, my group added a full pipette of water to the ...read more.

2. The loss of water from the hydrated compound was both and example of a spontaneous and an exothermic reaction. Throughout the lab much steam was released and the compound turned incredibly hard over such a short period of time. 3. When water was added the anhydrous compound was non-spontaneous and was and exothermic reaction due to the amount of heat given off. Conclusion The main thing I probably extracted from this lab was that almost anything you add to a compound a major reaction would occur. For example when I poured water into my anhydrous compound, the compound gave off a lot of steam.. Some sources of error could have been the amount of water added and the varying calculations. Overall I thought that this lab was helpful in that we found just what causes such reactions like steam to occur. ...read more.