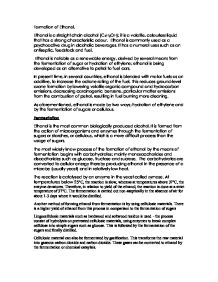 Formation of Ethanol. Ethanol is a straight chain alcohol (C2H5OH); it is a volatile, colourless liquid that has a strong characteristic odour. Ethanol is commonly used as a psychoactive drug in alcoholic beverages. It has a numeral uses such as an antiseptic, feedstock and fuel. Ethanol is notable as a renewable energy, derived by several means from the fermentation of sugar or hydration of ethylene; ethanol is being developed as an alternative to petrol to fuel cars. In present time, in several countries, ethanol is blended with motor fuels as an additive, to increase the octane rating of the fuel. ...read more.

It is formed from the action of microorganisms and enzymes through the fermentation of sugars or starches, or cellulous, which is a more difficult process than the usage of sugars. The most widely know process of the formation of ethanol by the means of fermentation begins with carbohydrates; mainly monosaccharides and disaccharides such as glucose, fructose and sucrose. The carbohydrates are converted to cellular energy thereby producing ethanol in the presence of a microbe (usually yeast) and in relatively low heat. The reaction is catalysed by an enzyme in the yeast called zymase. ...read more.

This is followed by the fermentation of the sugars and finally distilled. Cellulosic material can also be fermentated by gasification. This transforms the raw material into gaseous carbon dioxide and carbon dioxide. These gases can be converted to ethanol by the fermentation or chemical cataylsis. Hydration of Ethylene Ethanol for use as an industrial feedstock is made by the hydration of ethylene. Excess water is reacted with the ethylene in the presence of a catalyst (most commonly phosphoric acid) and under high pressure and a temperature of 300�C. C2H4(g) + H2O(g) � CH3CH2OH(l). ...read more.