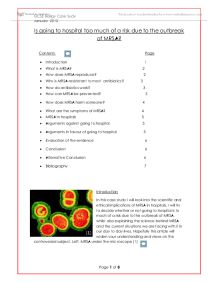 Is going to hospital too much of a risk due to the outbreak of MRSA? Contents Page * Introduction 1 * What is MRSA? 2 * How does MRSA reproduce? 2 * Why is MRSA resistatant to most antibiotics? 3 * How do antibiotics work? 3 * How can MRSA be prevented? 3 * How does MRSA harm someone? 4 * What are the symptoms of MRSA? 4 * MRSA in hospitals 5 * Arguments against going to hospital 5 * Arguments In favour of going to hospital 5 * Evaluation of the evidence 6 * Conclusion 6 * Alternative Conclusion 6 * Bibliography 7 Introduction In this case study I will look into the scientific and ethical implications of MRSA in hospitals. I will try to decide whether or not going to hospital is to much of a risk due to the outbreak of MRSA, whilst also explaining the science behind MRSA and the current situations we are facing with it in our day to day lives. Hopefully this article will widen your understanding and views on this controversial subject. Left: MRSA under the microscope (1) What is MRSA? MRSA (the abbreviation of Methicillin-Resistant Staphylococcus Aureus, often refered to as a "superbug" due to its restance to most antibiotics) ...read more.

When enough of the MRSA bacteria are desroyed, the immune system is able to recover and destroy the remaining few. However, antibiotics do not destoy viruses because viruses are not live bacteria. They carry DNA, which is injected into a living cell and uses that cell as a "host" to reproduce more of the infective viruses. (13) How can we prevent MRSA? As I explained on page 2, only a few antibiotics can kill MRSA, and the rate of mutation of MRSA is so high that immune strains of the bacteria are formed. This causes the current antibiotic to be rendered "useless" and there is a requirement for new antibiotics that can destroy the MRSA. Another method of prevention is through good personal hygeine. Some general tips are; Try not to share personal items like towels or razors, as this will increase the chance of spreading MRSA. Wash your hands thoroughly with soap and water or an alcohol-based hand sanitizer to destroy the bacteria. Cover cuts and scrapes with a clean bandage. This will help the wound heal, as well as preventing you from spreading bacteria to other people. Try not to touch other people's wounds or bandages. If you use any shared equipment, sanitize it before and after you use it. ...read more.

2. Recent evidence shows a recent reduction in MRSA cases, as from 2007 to 2008 (14). The number of death certificates in England and Wales which mentioned Meticillin-Resistant Staphylococcus Aureus in them decreased by 37% in 2009 to 781 from 1,230 in 2008. This 37% decrease is probibly due to raised awareness in general hygeine. This means it is becoming less common, and therefore there is a even lower risk of conceding MRSA at a hospital. 3. "There were 836 cases of MRSA infections in April to June of 2008, a 36% drop on the same period in 2007, and a 57% reduction since April to June 2004" - The Health Protection Agency. This evidence improves people's generall confidence in hospitals, decreasing the dangers on to benefits dangers ratio. Evaluation of the evidence My evaluation of this Conclusion After evaluating the evidence and refering to the original question "Is going to hospital too much of a risk due to the outbreak of MRSA?" I conclude that hospitals are not too much of a risk despite the outbreak of MRSA. This is because in the evidence section, the benefits of hospitals continuously outweighed the dangers of MRSA. There are only about 1 in 1000 preventable deaths in hospitals are caused by MRSA, concluding that about 99.9% of preventable deaths in hospitals are not caused by MRSA. ...read more.

An excellent GCSE level report that presents key scientific explanations and arguments clearly, with good use of relevant graphs and statistics and consistent references. To improve:
1)Clarify why the diseases that MRSA cause are so dangerous, briefly describing what they are. For example meningitis is the inflammation of the meninges in the brain
2)Name some of the alternative antibiotics that can be used to treat MRSA
3)Work on scientific language. Bacteria are never immune to anything. They are resistant