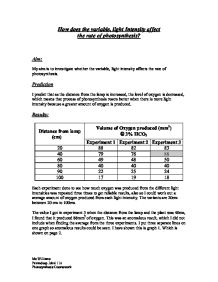 How does the variable, light Intensity affect the rate of photosynthesis?

How does the variable, light Intensity affect the rate of photosynthesis? Aim: My aim is to investigate whether the variable, light intensity affects the rate of photosynthesis. Prediction I predict that as the distance from the lamp is increased, the level of oxygen is decreased, which means that process of photosynthesis reacts better when there is more light intensity because a greater amount of oxygen is produced. Results: Distance from lamp (cm) Volume of Oxygen produced (mm3) @ 3% HCO3 Experiment 1 Experiment 2 Experiment 3 20 88 82 83 40 79 76 88 60 49 48 50 80 40 40 40 90 22 25 24 100 17 19 18 Each experiment done to see how much oxygen was produced from the different light intensities was repeated three times to get reliable results, also so I could work out a average amount of oxygen produced from each light intensity. The variants are 20cm between 20 cm to 100cm. ...read more.

These results give me a firm conclusion to believe that the process of photosynthesis reacts better when there is more light intensity because then there is a rise in the amount of oxygen produced. You can see the curve on graph 2 is arising. There are two sections on the graph, which I have closely looked at. The first in between the distance 20cm and 40cm, this is where the line is steady and also when the greatest amount of oxygen is produced. This line does not increase any more because of limiting factors. The word equation for photosynthesis is: Light Carbon dioxide (6CO2 ) + water (6H2O) Glucose (C6H12O6) + Oxygen (O2) Chlorophyll This is when you need carbon dioxide, water, light and chlorophyll for the process photosynthesis to take place. So on graph 2, the line is straight because they may not be enough carbon dioxide or light, so this means the process is limited. ...read more.

The three independent experiment results have been obtained from a computer program, (Focus CD), which efficiently records the data for which in this case, the distance between the lamp and the plant as a variable. I think the procedure used was not suitable enough to prove my prediction to be right because the results could be inaccurate, so for this reason I would have liked to have done the experiment practically. The following things are what I could have done to extend my investigation, I would have repeated the repeated the experiment a few times to get rid of anomalous results. Conducted the experiment in another room so there is no background light. All my measurements were accurate, except one anomalous result. It did not fit in as well as the other results. This result was in the third experiment, when the distance between the lamp and the plant was 40 cm. The first two experiment conducted were similar, the results were 79mm3 and 76mm3. The third experiment produced 88mm3 of oxygen. When working out the average oxygen produced at that distance, I excluded the anomalous result. Ms Williams Pavandeep Johal 11z Photosynthesis Coursework ...read more.