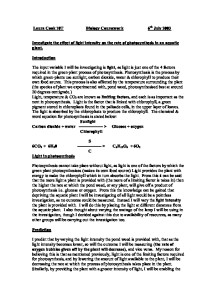 Investigate the effect of light intensity on the rate of photosynthesis in an aquatic plant.

Laura Cook 10T Biology Coursework 6th July 2003 Investigate the effect of light intensity on the rate of photosynthesis in an aquatic plant. Introduction The input variable I will be investigating is light, as light is just one of the 4 factors required in the green-plant process of photosynthesis. Photosynthesis is the process by which green-plants use sunlight, carbon dioxide, water & chlorophyll to produce their own food source. This process is also affected by the temperature surrounding the plant (the species of plant we experimented with, pond weed, photosynthesised best at around 20 degrees centigrade.) Light, temperature & CO2 are known as limiting factors, and each is as important as the next in photosynthesis. Light is the factor that is linked with chlorophyll, a green pigment stored in chloroplasts found in the palisade cells, in the upper layer of leaves. The light is absorbed by the chloroplasts to produce the chlorophyll. The chemical & word equation for photosynthesis is stated below: Sunlight Carbon dioxide + water ----------------- > Glucose + oxygen Chlorophyll S 6CO2 + 6H20 ----------------- > C6H12O6 + 6O2 C Light in photosynthesis Photosynthesis cannot take place without light, as light is one of the factors by which the green plant photosynthesises (makes its own food source) Light provides the plant with energy to make the chlorophyll which in turn absorbs the light. From this it can be said that the more light a plant is provided with (the more of a limiting factor is takes in) then the higher the rate at which the pond weed, or any plant, will give off a product of photosynthesis i.e. glucose or oxygen. From this the knowledge can be gained that depriving the aquatic plant I will be investigating of all light would be a pointless investigation, as no outcome could be measured. Instead I will vary the light intensity the plant is provided with. ...read more.

* Person 1 prepare stop-clock to time outcome variable results for 3 minutes * Person 2 prepare to count number of oxygen bubbles given off within this time * Person 3 prepare to note number of bubbles called out by person 2 * Begin what you have prepared to do after the "adjusting time" of 2 minutes * Note the results you have gained * Repeat the test for 0cm once more, if results are a lot different, repeat a 2nd time * Leave for 2 minutes to adjust to light source at 25cm away from pond weed * Complete the above for light source at a distance of : 25cm, 50cm, 75cm & 100cm NOTE: It is helpful to begin constructing a rough graph of the results you are obtaining throughout the experiment in order to see whether you are gaining accurate results. You should see this if a downward curve/line is present, if you are recording distance of the lamp from the plant, on your graph. You should see an upward curve/line present, if you are recording light intensity on your graph, the reciprocal of the distance, other wise stated as 1 D This is perhaps the best choice of graph to construct, as it clearly presents the idea that as the light intensity increases, so does the rate at which oxygen is given off by the aquatic plant. See diagrams c & d below... Diagram c Diagram d Results obtained from experiment : "Investigating if light intensity effects the rate of photosynthesis in an aquatic plant." As mentioned previously, the results I have obtained from the experiment will be of measured in 5 intervals, ranging from 0cm -100cm, 1 repeat reading taken as well as an original reading & an average of the 2 results calculated. The results are as tabulated below. Test 1 Test 2 Average result Analysis of results obtained : Curve Graph of results As mentioned previously, I could construct one of 2 graphs (Diagrams c & d) ...read more.

I would conduct this experiment by exposing the water in which the pond weed was surrounded by to a range of levels of lime water, which would decrease the levels of CO2 when the amount of lime water is increased. Plan for the investigation Note: Conduct experiment in a well lit area, make sure light levels are never adjusted. * Ensure pond weed (approx 7-10cm) has previously been kept in a well lit area, is very healthy & photosynthesising well ( Nip end of weed with nail) * Set up pond weed, as in Diagram b, in a large beaker of approximately 1 litre of fresh water at 23 degrees centigrade, covered by a funnel & test tube. * Time for 5 minutes to allow the pond weed to adjust to the natural levels of the surroundings it is in * Begin investigation: Time with a stop clock for 5 minutes, counting the number of bubbles given off by the pondweed, then if there is a sufficient amount of gas within the test tube covering the funnel, calculate the amount of oxygen given off by the pond weed. * Change water to ensure initial CO2 levels are the same for the next test * Take a repeat result. If the repeat is over a sensible amount above the original result, take a 2nd repeat to gain a fair average. * Repeat test for 4 more different levels of limewater to which the pondweed will be exposed. These being Note: Change the water after each test to ensure same starting level of Carbon dioxide in water. Even though we are measuring whether the rate of photosynthesis is affected by different levels of exposure to CO2, It would only be a fair test if the different range of levels can clearly be measured, which they cannot be clearly measured if the test is conducted with the same water, even though the levels of CO2 would be different. INVESTIGATING THE EFFECT OF LIGHT INTENSITY ON THE RATE OF PHOTOSYNTHESIS ...read more.