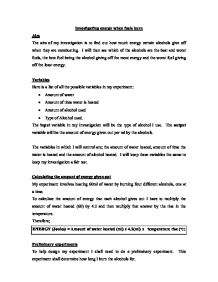 Investigating energy when fuels burn Aim The aim of my investigation is to find out how much energy certain alcohols give off when they are combusting. I will then see which of the alcohols are the best and worst fuels, the best fuel being the alcohol giving off the most energy and the worst fuel giving off the least energy. Variables Here is a list of all the possible variables in my experiment: * Amount of water * Amount of time water is heated * Amount of alcohol used * Type of Alcohol used. The input variable in my investigation will be the type of alcohol I use. The output variable will be the amount of energy given out per ml by the alcohols. The variables in which I will control are; the amount of water heated, amount of time the water is heated and the amount of alcohol heated. I will keep these variables the same to keep my investigation a fair test. Calculating the amount of energy given out My experiment involves heating 60ml of water by burning four different alcohols, one at a time. ...read more.

Prediction In this investigation I think that Butanol will give out the most heat energy as it has more bonds to break when combusting. I think methanol will give out the least heat energy as it has the least amount of bonds to break. Here is a diagram showing the amount of bonds Butanol and Methanol have. Methanol Butanol Butanol clearly has more CH bonds than Methanol and so will give off more heat energy when breaking them therefore making it the best fuel. I believe the alcohols will behave this way as this is the way Alkanes act when they combust. Here is a graph that shows the order in which Alkenes combust. From looking at it we can see that Methane gives out the least heat energy as it has the least CH bonds and Hexane gives out the most energy as it has the most CH bonds. The rule for this graph is; the more bonds, the more energy given out. Results Here is a table to show the results I collected. This table shows I repeated the experiment three times, this was so I could work out an average of the results to get an accurate end result. ...read more.

Evaluation I believe that the results I collected when doing my experiment back up my conclusions very well. Most of my results are fairly accurate as I did each experiment three times then found the average of the three results however; I have one anomalous result which I did not include in my averages. I therefore believe that my results are sufficient enough to back up my conclusion which is that alcohols behave in a similar way as Alkenes when they burn in that as the number of CH they have increases the amount of energy they give out increases also. My results also prove that me prediction was correct. However, if I were to do my experiment again I there are a few things I might change/do improve it: * Use more alcohols to see if the pattern with the CH bonds continues. * Repeat the experiment 5 or 6 times to get an even more accurate result * Check the temperature of the water at regular intervals rather than at the start and the finish. * Use more water so it did not heat up as fast. * Record the weight before and after the alcohols have been burned and work out the alcohol on moles. ...read more.