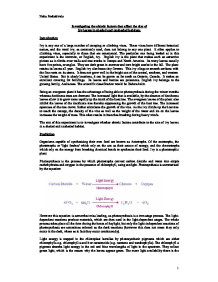 Investigating the abiotic factors that affect the size of Ivy leaves in shaded and unshaded habitats.

Investigating the abiotic factors that affect the size of Ivy leaves in shaded and unshaded habitats. Introduction Ivy is any one of a large number of creeping or climbing vines. These vines have different botanical names, and the word ivy, as commonly used, does not belong to any one plant. It often applies to climbing vines, especially to those that are ornamental. The particular one being looked at in this experiment is the common, or English, ivy. English ivy is the plant that makes such an attractive picture as it climbs over walls and tree trunks in Europe and North America. Its waxy leaves usually have five points, or angles. They are dark green in summer and turn bright scarlet in the fall. The plant retains its leaves all year. English ivy also bears tiny flowers. This ivy clings to smooth surfaces with the fine roots on its stems. It does not grow well in the bright sun of the central, southern, and western United States. But in shady locations, it can be grown as far north as Ontario, Canada. It makes an excellent covering for buildings. Its leaves and berries are poisonous. English ivy belongs to the ginseng family, Araliaceae. The scientific classification would be Hedera helix. Being an evergreen plant it has the advantage of being able to photosynthesis during the winter months whereas deciduous trees are dormant. The increased light that is available, by the absence of deciduous leaves allow it to grow more rapidly up the trunk of the host tree. The evergreen leaves of the plant also inhibit the leaves of the deciduous tree thereby suppressing the growth of the host tree. The increased openness of the tree crown further stimulates the growth of the vine. As the ivy climbs up the host tree to reach the canopy, the density of the vine as well as the weight of the water and ice on the leaves increases the weight of trees. ...read more.

* The light probe was taken and pointed towards the clipboard to give three different values at 50cm intervals (at 50cm, 100cm and 150cm). Air Humidity * Using a whirling hygrometer. Consists of thermometers; the bulb of one being kept dry while the other permanently wet. Both are mounted on a frame. The hygrometer will be rotated in the air until both thermometers give a constant reading. * The wet bubble thermometer will always give a lower reading than the dry bubble one, due to the cooling effect of the evaporating water. Then by looking at the different between the two thermometers and using a special scale we can work out the humidity as a percentage. Air Temperature * The probe was held at 1m above the ground and the reading displayed was recorded. Soil Temperature * The probe was placed into the soil within the quadrat. * It was pushed into the soil until it reached a maximum; the value displayed was then recorded. Wind Speed * This was done by twisting an anometer in the direction of the wind. * Value was recorded. pH Meter * This was placed within the area where the quadrat had been placed. * It was pushed into the soil until it reached a maximum the value was then recorded. 8. Now take a soil sample using a trowel and place in a plastic bag, take this back to the classroom to find out the pH and nutrient contents of the soil. (Details of the pH and NPK test are after the method) 9. Now repeat the above steps again in the unshaded region. Once all the results have been obtained from both habitats, the t-test or Chi2 tests are statistical tests, which can be used to analyse the results. To show whether there is a significant difference between the two sets of data. I will be using the t-test (justifications of using this method of analysis are explained before carrying out the test). ...read more.

The null hypothesis stated: 'There will be no difference between the sizes of leaves growing in the shaded and unshaded region; any difference in size will be due to chance'. As the t-value I have worked out is greater than the critical value. This suggests that there is a significant difference between the cross-sectional areas of leaves which are growing in a shaded region than those that are growing in an unshaded region. The leaves in the shaded area are larger in size compared to leaves in the unshaded area. Hence, proving my hypothesis. Generally my experiment was a success, my reading were fairly accurate and reliable. From my finding I can now say that there is a significant difference between the size of ivy leaves in an unshaded region and a shaded region. It is clear that the leaves are larger in size in the shaded region as oppose to the leaves from the unshaded region. This is primarily affected by the different light intensity which was measured in both areas. The light intensity was higher in the unshaded region and lower in the shaded, which in affect caused the difference in size of the leaf. Other abiotic factors were also taken into consideration: humidity, soil and air temperature, wind speed, pH and NPK concentration. These did vary between the two regions, they were abiotic variable which were uncontrollable and therefore could have affected the results obtained. Despite this, it can still be firmly concluded that light intensity has an apparent affect on the size and shade of grebe of ivy leaves from unshaded and shaded areas. For future experiments I would look to use a larger sample size, take more reading for light intensity, and for other abiotic factors. Moreover I would investigate the other abiotic factors which could influence the size of ivy leaves, and take biotic factors into consideration as well. By carrying out the experiment in both areas on several days, or doing several experiments simultaneously, may help me to make a more generalised conclusion. ...read more.