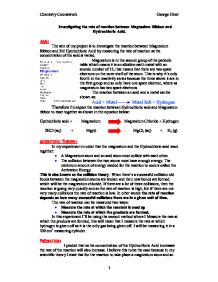 Investigating the rate of reaction between Magnesium Ribbon and Hydrochloric Acid.

This causes them to move faster and to collide more often. Then also because they have taken in energy when they collide there is more chance of them colliding with enough energy to break the old bond, therefore there will be more successful collisions. * The use of a Catalyst. A catalyst is a chemical substance that speeds up a reaction, without actually being used up itself. It does this by lowering the amount of energy needed to break the old bonds. In other words a catalyst lowers the activation energy. It also provides a surface for the molecules to attach to, thereby increasing their chances of bumping into each other. In this experiment I won't actually be using a catalyst at any time. FAIR TESTING: When I'm carrying out the experiment it's vital that I keep all the conditions the same and make sure that everything I do it applied to all the experiments. If I do this then there will be no reason for the results to be anomalous or wrong, therefore this should produce very accurate results. The different things I will have to keep the same to keep it a fair test are: * Use the same apparatus every time, this is because different apparatus may have different volumes and so the results will be inaccurate. * Clean the apparatus after each experiment otherwise some acid may be left in the side arm flask and so the next solution will have ore acid and so will be more concentrated. * Put In the bung very quickly. The slower I put the bung in the more hydrogen is lost to the air. But if I push the bung in too hard lots of air is pushed through into the measuring cylinder at one go and so the results may be affected by this. * Cut the magnesium ribbon just before I actually need it this is because if it is left in the air too long then it will start to ...read more.

I'd use a thermometer and make sure that the acid was the same temperature each time I did the experiment. Also I could have done all the experiments in on day and so this would have limited the temperature range as the temperature can't fluctuate to a large degree all in one day. Apart from that looking at the tables of results they all look very accurate as there isn't too much variation in each run for the different concentrations. If I could do the experiment again I would have also liked to do five runs for each concentration. This would then mean that there was an even larger average, so that any anomalous results were averaged out amongst the other runs. Also I would have liked to have done a larger range of concentrations for example going up in 0.2 Molars from 0 to 3 Molars, this would give more graphs and so more chance to spot patterns. I would have like to use an electronic stirrer device. This would be more appropriate than me stirring it as I may stir it more or less for each of the other concentrations and so the test would be unfair. But I would have liked to use a stirrer because when I have the acid in the side arm flask if it has been concentrated then the distilled water may not be completely mixed with the acid and so some areas of the solution may be more diluted than others and so affecting the results. Also when the reaction was taking place the hydrogen that was being given off was sometimes sticking to the Magnesium ribbon, thus reducing the surface area of the ribbon. This would mean that there are less magnesium particles for the acid particles to collide and react with. Although there are a few things that I would have liked to have changed, there wasn't enough time to repeat the whole experiment again with the new improvements. But I think that the results are actually very accurate and very adequate for drawing up concise conclusions. Chemistry Coursework George Hiner 1 ...read more.