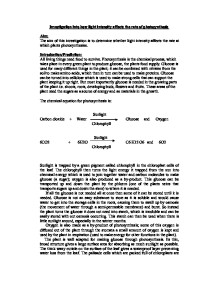 Investigation into how light intensity affects the rate of photosynthesis.

Investigation into how light intensity affects the rate of photosynthesis Aim: The aim of this investigation is to determine whether light intensity affects the rate at which plants photosynthesise. Introduction/Prediction: All living things need food to survive. Photosynthesis is the chemical process, which takes place in every green plant to produce glucose, the plants food supply. Glucose is used for many different things in the plant; it can be combined with nitrates from the soil to make amino acids, which then in turn can be used to make proteins. Glucose can be turned into cellulose which is used to make strong cells that can support the plant keeping it up right. But most importantly glucose is needed in the growing parts of the plant i.e. shoots, roots, developing buds, flowers and fruits. These areas of the plant need the sugars as a source of energy and as materials in the growth. The chemical equation for photosynthesis is: Sunlight Carbon dioxide + Water Glucose and Oxygen Chlorophyll Sunlight 6CO2 + 6H2O C6 H12 O6 and 6O2 Chlorophyll Sunlight is trapped by a green pigment called chlorophyll in the chloroplast cells of the leaf. The chlorophyll then turns the light energy it trapped from the sun into chemical energy which is used to join together water and carbon molecules to make glucose (a sugar); oxygen is also produced as a by-product. This glucose can be transported up and down the plant by the phloem (one of the plants veins that transports sugars up and down the stem) ...read more.

Unfortunately we do not have the apparatus to measure how much gas a plant is giving off but instead we are going to use elodea, which is a type of pond weed. By submerging the pond weed in water then placing it in different light intensities, for a set amount of time, we can count how many oxygen bubbles the elodea gives off, thus giving us a good idea of how much oxygen is being given off as a by-product of photosynthesis. The more bubbles, the more oxygen the more the plant is photosynthesizing. The less bubbles, the slower the rate of photosynthesis. Apparatus: Bench lamp Ruler Elodea, pond weed Test tube Test tube holder Timer Light intensity measuring device Water Detailed Method: 1.) Set up the apparatus as shown above. 2.) Place the pond weed in the test tube with 25ml� of water. 3.) Place test tube in test tube holder. 4.) Measure the distance from the elodea to the light. 5.) Turn on the lamp. 6.) Measure the light intensity. 7.) Start the timer and count how many bubbles the elodea gives off in 1minute. 8.) Record results and repeat. Fair test and variables: To keep this a fair test we will only change one variable, that variable will be the distance between the elodea and the light source. Moving the elodea further away from the light source will give us the different light intensities that we need to do this investigation. Other variables we could have changed include: the colour of the light source as chlorophyll easily absorbs blue and red light but ...read more.

Human error also comes into play as well, as if the person counting bubbles was not totally concentrating they might miss a bubble or think they saw a bubble when they didn't this could cause serious problems with the accuracy of our results. What's more there is also the problem of when to start the timer, should the timer be started after the first bubble or before the first bubble thus meaning less bubbles were counted. In future experiments this should be specified in the plan and stuck to with each experiment. So although for our small experiment I feel our results and my prediction are justified there are many things that could be changed to make our experiment more reliable and accurate as stated earlier. To extend our experiment we could try using coloured light to prove that the colour of the light is also a limiting factor, or see whether it is only certain types of light that effect photosynthesis by trying different types of light such as fluorescent or halogen lights. We could also try involving more of the other limiting factors such as temperature or carbon dioxide concentration by linking them into this experiment as well as investigating them as limiting factors on there own. One other way of extending out investigation would be to try using a different method of measuring whether light is a limiting factor in photosynthesis such as measuring how much carbon dioxide the plant is using instead of how much oxygen it is giving out and then comparing the results with the results we gained from this experiment. ...read more.