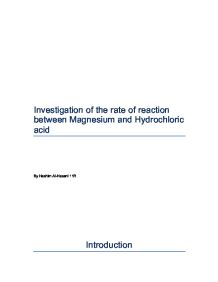 Investigation of the rate of reaction between Magnesium and Hydrochloric acid

This would help to make the test fair as there would be no water in the flask to dilute the acid. Additionally, I would improve the experiment by using a longer measuring duration than two minutes as the reactions never stopped, they had only slowed down. This is reflected on Graphs 1-5 - the curves of best fit were never flat and thus suggesting that the reaction never stopped, but in truth, the reaction would have stopped sooner or later. Confidence on the Conclusion Generally, I am quite confident with my conclusion. I attained a set of results which strongly suggested that the concentration of acid has an effect on the rate of the reaction. Although, as most of the graphs show, many of the range bars are a bit large, meaning that the results are not very reliable as there is a large scatter of data, perhaps this was because the rubber cork was not sealed as tightly for these experiments, or I took longer to place it back on to the top of the conical flask hence, causing some of the product gas to escape, justifying the reason why its results was so scattered. Throughout the experiment, I had obtained many outliers in my results, as shown by Tables 1-4. These may have occurred because of any of the following reasons: * On some repeats, I did not seal the rubber bung as quickly as I did on other repeats or I did not seal it as tightly, causing more hydrochloric acid to escape into the room and therefore making the reading in the gas syringe less than what it would have been. * Not all of the remaining hydrochloric acid from the previous repeat was washed out of the conical flask - making the rate of reaction for the next repeat faster Despite these outliers, the majority of the averages were close to or on the curve of best fit, so after eliminating outliers, the results were reliable on the whole. ...read more.

This is a reasonably well written laboratory report. It uses the appropriate level of scientific terminology with spelling punctuation and grammar of a generally good quality. Good features and further improvements have been suggested throughout.