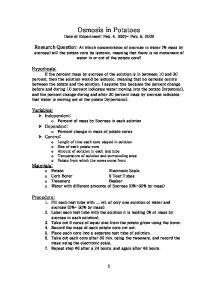 Osmosis in Potatoes Lab. At which concentration of sucrose in water (% mass by sucrose) will the potato core be isotonic, meaning that there is no movement of water in or out of the potato core?

Osmosis in Potatoes Date of Experiment: Feb. 4, 2009- Feb. 6, 2009 Research Question: At which concentration of sucrose in water (% mass by sucrose) will the potato core be isotonic, meaning that there is no movement of water in or out of the potato core? Hypothesis: If the percent mass by sucrose of the solution is in between 10 and 30 percent, then the solution would be isotonic, meaning that no osmosis occurs between the potato and the solution. I assume this because the percent change before and during 10 percent indicates water moving into the potato (hypotonic), and the percent change during and after 30 percent mass by sucrose indicates that water is moving out of the potato (hypertonic). Variables: > Independent: o Percent of mass by Sucrose in each solution > Dependent: o Percent change in mass of potato cores > Control: o Length of time each core stayed in solution o Size of each potato core o Amount of solution in each test tube o Temperature of solution and surrounding area o Potato from which the cores come from Materials: o Potato Electronic Scale o Cork Borer 6 Test Tubes o Tweezers Beaker o Water with different amounts of Sucrose (0%-50% by mass) ...read more.

Once again, we head back to the possibility of imperfections in things such as measurements, and how there is a very slim chance that each test tube contained an EXACT amount of sucrose by mass, meaning that it is highly unlikely that the test tube labeled with 10% concentration of sucrose had exactly 10% sucrose by mass. These inaccurate measurements could have affected what the equation for our line of best fit was, and thus, again, affecting the outcome of our final answer. Another problem encountered was how the potato cores in solutions with less concentrations of sucrose would float to the top, sometimes with parts of the core above the surface of the water. This could affect our recordings of mass because some of the water that was stored in the top of our potato never moved out because it was never completely submerged, or vice versa. One last thing I noticed is that when we took the potato cores out to measure the masses, we drained out some of the water, and didn't place it back into the test tube. This could maybe affect the amount of water that is left to move into the potato, or maybe even effect the final measuring of mass. The point is that there are many little factors, events, and disturbances that may not seem like much, but when they are all added up, they can change, sometimes drastically, your final answer. ?? ?? ?? ?? 1 ...read more.

*****
A detailed account of an investigation with a very specific aim. Good data processing and graph.