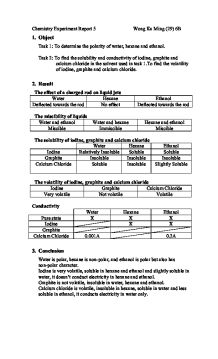 In experiment 4, graphite is insoluble in water, hexane and ethanol. Graphite has a layered giant covalent structure, the layers are held by weak van der Waal's forces. The giant covalent structure makes graphite insoluble in any solvent. Graphite has a high melting point due to the giant covalent structure, so that it is not volatile. Structure of graphite In experiment 5, calcium chloride is soluble in water and ethanol but not hexane. Calcium is an ionic compound. Ionic substances are soluble in polar solvent, e.g. water and ethanol, due to the attraction between the ion and the polar solvent molecule. They are insoluble in non-polar solvents. Although ionic compounds usually have a high boiling point, but calcium chloride carry covalent character, so that it has a low boiling point and it is volatile. Calcium chloride in water and ethanol conducts electricity in water because there are mobile ions. ...read more.